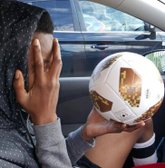 The Title is still possible.

The title is still possible for FC Premier U15s with 2 games to go after winning 4-3 in dramatic style against Lane Head. FC Premier went into a 3-0 lead after half an hour and that was the half time score but within 20 minutes of the second half it was 3-3. The U15s really had to dig in but have kept the title a possibility after Daniel Henry scored a last minute winner. There were jubilant scenes at Ray Hall lane and the lads enjoyed their victory after a tough encounter against the previously unbeaten Lane Head. Goalscorers were Daniel Henry (2) Kristian Storer and Daniel Lee. Man of the match voted by the referee was De Quarnai Williams who took home the new Russia World Cup ball as his reward.
Please see the Match report for more details.
Share via
FacebookTwitter
https://www.pitchero.com/clubs
Recent news