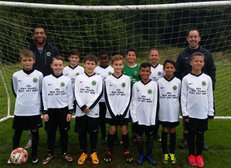 It was a 9:30am kick-off for the Colts this week against Wyrley Rangers at Kings Hill. The Colts started the game really well applying a lot of pressure on the opposition resulting in a number of corners in quick succession. However the Colts found themselves a goal down and despite some further good play including a good shot from Max it was then 2-0 to the opposition. The Colts got a goal back following some good build up play resulting in Rhylee creating some space for himself to score a well taken goal. The Colts then equalised when the keeper could not hold onto a shot from Luke and Rhylee was quickest to the rebound to slot in his second goal of the game. Unfortunately the opposition scored a further 3 goals and despite some good saves from Reuben the Colts conceded another 2 goals in the last minutes of the game.