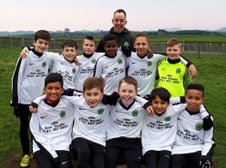 Odds very much stacked against us

Rhylee was today's stand in goalkeeper as well as having no subs and only 8 players on the pitch for the whole match.

Khalsa very much had the upper hand and were able to maintain the pressure throughout the match. 4 goals were scored in the first half, however this didn't stop Rhylee making some brilliant saves and commanding his team mates to keep the ball out of his area.

From the whistle Khalsa continued the pressure forcing Rhylee to make a save, which wasn't enough to stop the secondary ball scoring a goal. FC returned the pressure and were awarded a corner, Matty launched the ball into the area, which was headed into the goal by Marley - who scored his first goal for FC Premier as well as his first of the season!!

Again Khalsa pressurised causing Rhylee to make some important saves and the defence to work hard and clear their area. On the break, Ollie had a shot on goal which was saved and forced out for Max to reach first and score the Colts' second goal.

Khalsa then scored 2 more goals with Rhylee finishing the match having to make a fantastic save on a shot which was definitely going in.