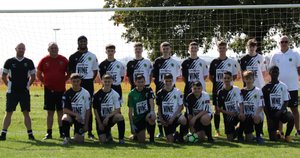 First game of the new season...

The game kicked off late due to the fact that the referee never turned up...luckily the opposition had a 'qualified' ref amongst their ranks.

It didn't take long for the first goal of the new season...2 minutes in and Mantej continued his run of scoring in every game so far. Ten minutes later was it penalty as Simon was brought down in the box...NO said the referee another immediate foul on Simon, surely this time it was a penalty...NO said the referee...WHAT!...a third foul within as many seconds...this had to be a penalty...YES...at last the ref finally agreed with what everybody was seeing...up stepped Simon and he cooly dispatched the ball in to the corner of the net giving the goalkeeper no chance. It didn't take long before the third goal was calmly slotted home by George, we were on the rampage. It took only 5 minutes before Harreson made it 4 - 0 and there was still 15 minutes half-time.

Black Country Wanderers gave us a taste of our own medicine and scored within two minutes of the restart to reduce the deficit, route one straight down the middle, a tactic they used for the next 10 minutes until we finally got a grip albeit missing chances along the way, would we rue missing those chances? It took us twenty minutes to restore our four goal lead with Michael hitting his first of the season, from then on we never looked like conceding a further goal. The chances kept coming but we still failed to capitalise until Mantej scored our sixth goal ten minutes from the end of the game

Players of the match were:-