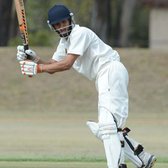 Henry (24) is a British Passport holding South African, currently plying his trade in Australia looking to follow in the footsteps of his famous father.

The talented all-rounder is making his own way in the game, having already represented South Africa Under-19s and Boland in 38 domestic matches, across the three formats.

Riyaad’s s father made his full South Africa debut at the age of 40 following the end of apartheid and was the first non-white player to represent the country. He went on to become South Africa's chairman of selectors.

The 24-year-old was born in Falkirk (Scotland) when his father was coming to the end of a successful 10-year stint in the country which saw him earn 62 caps.

Cricket Scotland were aware of Riyaad’s Scottish connections and, courtesy of his performances for Northants 2nd XI, whilst playing premier club cricket for Rushton in 2016 (298 runs at 22.77 and 32 wickets at 14.97), he was offered a match for the Scottish A side against Yorkshire 2nd XI.

"We had a call from Jim Love [former England, Scotland and Yorkshire cricketer] who had seen him play for Northants 2nd XI against Yorkshire and liked what he saw".

"This week's game has given us the opportunity to have a look for ourselves and we've been impressed. Obviously if he is anything like his dad he is going to be some player and he certainly seems to have his old-man's steeliness and confidence".

"He is a very good all-round cricketer who bats in the top order and bowls medium pace and gets the ball to swing. The most impressive thing is that he is keen to get involved with us and pursue his opportunities with Scotland. He certainly looks as if he could be another potential addition to our squad."

Henry decided to forego first-class cricket in South Africa this season to pursue cricket in Australia. He is currently playing for Barooga CC in the Murray Valley Cricket Association, where at the point of writing, he is excelling.

As well as being an exciting player, Riyaad shall be highly involved in the coaching of both senior and junior players for the 2017. The UKCC Level 2 coaching qualification, as well as being a qualified teacher (albeit being in English) shall make him an excellent additional around the club.