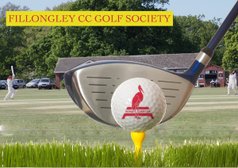 The newly formed Fillongley Cricket Club Golf Society had their first event today at Ansty Golf Club. The competitors were Rosey, JK, CT, Dale Gregory, Sam Skelding, Nighty, Sladey and Pops and the round was played on a handicap basis with Stableford scoring to determine the winner. There was also a competition for the longest drive and closest to the pin.

After a bacon sarnie and coffee, we hit the range before heading out onto the course. The first fourball of Sladey, Rose, Nighty and Pops avoided being filmed on the first tee but the second fourball didn’t with video footage of all four balls being sprayed around off the tee.

After the 9th refreshments were taken and scores were compared before the 10th hole and the closest to the pin contest. Pops put his on the fringe of the green, Sladey wen’t to the right, Rose to the left and Nighty just short of the small pond in front of the green, only to then put his next shot straight in the water. None of the second fourball got anywhere near although there was a chance when CT hit his tee shot to the right of the green and heading for the brook only for the ball to ricochet back across the green off a tree.

It was on the 18th hole that we had the longest drive competition and Rosey led the way with the first group. Nighty will argue that he would have won hands down had he not smacked his first drive into the driving range and so his 2nd tee shot didn’t count. Sam got close to Rosey’s marker for the second group but then JK out-hit him and to finish virtually level with Rosey’s marker and so after some adjudication it was agreed it was a draw.

We finished the 18th and then headed down to the clubhouse for the results, buffet and beers and to watch some of the highlights (for some of us), including Sladey chipping in, that were captured on film during the day.

Many thanks to Rose for organising the day, I believe there are plans to have another in August for those unable to make today.

Overall winner: Simon Rose (40 points – Sam had the same number of points but Rosey won on the back 9 holes count-back)

Closest to the Pin: Pops