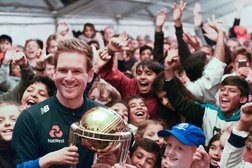 EOIN MORGAN RETURNS TO FINCHLEY WITH THE CRICKET WORLD CUP!

Reports in local and national press:

A full album of Eoin's visit can be found on the gallery of this website!

Silverware in hand, the victorious England skipper and World Cup hero returned to his first senior club as part of a World Cup trophy tour taking members of the winning squad back to where their cricket began. Tom Harrison, the England Cricket Board Chief Executive, says the tour is designed ‘to use the World Cup trophy to inspire kids across the country that wanted to pick up bat and ball after watching the dramatic final at Lord’s’.

When he moved to England and Middlesex County Cricket Club from Ireland as a teenager, Eoin Morgan joined Finchley and settled into digs on nearby Dudley Road. ‘This is where my journey started when I was 15-16 years old – Finchley was my first senior club – and all the basics that I learned as a kid and was taught by my Dad, I came here and learnt so much more. And I still pop in, training as I often do at the neighbouring Middlesex indoor facility.’

Eoin participated in six games of cricket across the ground, signed dozens of bats and shirts, took a load of selfies, and answered a range of questions from young and old. His answers covered the size of his first bat (6!), how he hits so many 6’s, when he was most worried during the World Cup campaign (after the Sri Lanka match), his favourite batter (Kohli), how he and the team celebrated their win and his aspirations for the future of England cricket. ‘We would now love to go to every World cricket event as either favourites or genuine, realistic contenders’.

Jamie Whelan, one of his former Finchley first team mates, sat with the England skipper on stage fondly reminiscing about Eoin’s time with the club- his skimming cover drives, his diving catches, his big hundreds and his winning smile.

Will Munford and Naomi Dattani (Middlesex 50 over skipper) hosted the event in a sporadically wind shaken marquee – ‘It was fantastic to see Eoin. A genuinely nice guy, it seems only a moment ago that he was living and playing with us. The kids will remember it all their lives! And perhaps one of them will follow in Eoin’s shoes.’

All in all a fantastic day for the club, showcasing the very best of Finchley Cricket Club to a wide audience. We are incredibly proud to be Eoin's first club on these shores. He was a delight, bringing so much joy to the 100s of kids in attendance, and providing many of our alumni the chance for some nostalgic reflection of his and their time playing at Arden Field. The event was reported widely in local and national newspapers, the links to some of which can be found at the top of this article.