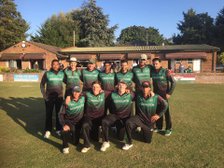 The first team defended 271 against Ealing on Saturday to complete a remarkable run of form which saw them stay in the Middlesex Premier League by just two points. With 5 games to go Finchley were languishing on 29 points, 28 from safety, but four wins in the next four weeks left them two points clear of the relegation zone heading into the final weekend. A Stanmore loss away at Richmond or a Finchley win at home to Ealing would seal survival.

Skipper Hass Khan won the toss and elected to bat against a strong Ealing side, who themselves needed to win to keep their title hopes alive. Maj Ali fell early to medium pacer Mungo Russell, but after a slow start Jake Milton (40) and Tom Powe (45) rebuilt well to take the score to 96-1 in the 22nd over. Just as they were starting to go through the gears, however, both fell in quick succession. Finchley’s innings took a further blow as Kash Ali (10) holed out to long on, leaving them behind in the game at 116-4 after 30 overs. This brought together Hass (53) and Rahul Wijeratne (87), who put together an exceptional and ultimately match-defining partnership. Hass has been outstanding in the closing stages of the season, and his consistency with the bat continued with a run-a-ball 50, but it was Wij who stole the show with a blistering 87 off 64 balls. Fresh from a two month holiday, Rahul plundered a strong Ealing attack to all parts of Arden Field, peppering the extra cover boundary. His highlights are well worth a watch on the above links, particularly a lofted straight drive off Ealing’s strike fast bowler. When he fell in the 47th over, the pair had put on 123 off 100 balls to put Finchley in a strong position. A combination of deft slip drives and lusty blows from Sumeet Sharma (16*) saw Finchley close their innings on 271-5.

A crucial early wicket from Tilan Wijesinghe (8.4-0-36-1) saw the back of the dangerous Oli Wilkin for a quickfire 16. Middlesex’ Robbie White was dropped next over off the bowling of Seb Hatchett (9-2-38-0), which looked increasingly costly as Ealing’s second wicket partnership motored to 76-1. Kash dismissed opener Farrell for 43 in the 14th over, but this brought to the crease Ealing’s overseas, who with White made batting look very easy for the next hour. On a good pitch and quick outfield, Finchley struggled to contain the flow of runs, as these two high class batters marched Ealing to 198-2 off 35 overs, requiring 74 to win off the last 90 balls. The introduction of Joe Lowe (10-1-63-1), however, changed the game. Beginning to extract some turn from the surface, Jlo created a number of chances including a strong appeal for caught behind which was turned down. Unable to pick his googly, Ealing’s batsmen counterpunched with an array of well-executed slip drives, before Joe finally got his man, bowling overseas Bailey Capel (71) through the gate with a beauty. 202-3. Seb returned to bowl White (69) round his legs in the next over, giving Finchley a real sniff with two new batsmen at the crease. Sumeet (2-0-11-2) was brought into the attack and struck twice in as many overs with a hostile spell, dismissing Ealing’s 5 and 6 to well directed short balls, caught midwicket and deep-midwicket respectively. Albeit unconventional wickets for a leg spinner, they proved vital as Ealing’s top-heavy batting lineup were left with 60 to win off the last 10 overs.

With their season on the line, Finchley’s fielding – hardly the side’s strength for much of the year – came to the fore. Two run outs in successive balls left Ealing on 237-8 in the 46th, and from nowhere Finchley were now ahead in the game. An excellent catch from Hass low down at long on dismissed Ealing’s last recognised batsman, and Ealing’s last pair were left with too much to do, needing 32 of the last 3 overs. Fittingly, in his last game for the club before moving to New Zealand, Jake Milton sealed the game. Jake took advantage of some poor calling from Mungo Russell (4 off 15 balls) to run him out, and the makeshift number 10 was left stranded a long way short of his ground.

With Stanmore winning at Richmond, the win was crucial in securing the 1s’ Premier League status for next year, whilst finishing the season just one win away from 4th place will give the side real confidence heading into next year. With some much-needed change afoot on and off the field, this Lazarus-like comeback will hopefully mark the start of an exciting time for the club.