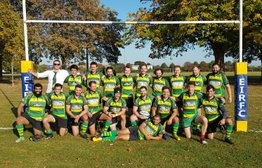 On the back of a strong victory last week, the Mighty Fins 2’s arrived bang on time, with twenty minutes to go till kick off, at Enfield Ignations determined to carry on winning ways. Unfortunately star prop Alex Thomas ruled himself out of contention early in the day. On the way to pick up some electrolyte filled sports beverages, Alex found himself waylaid by the Mighty Fins faithful sponsor the Faltering Fullback. Whilst watching the rugby world cup for research purposes, Alex found he had not bought an energising Lucozade at all, but had in fact consumed several lager beers. Quick thinking from interim captain PCDC saved the day, and Alex was dumped half a mile from the ground where he could do no further damage.

For the rest of the mighty fins, it was a good day at the office. With the oppo short of a few players, scrum half Nico graciously agreed to help them out for the first half, before switching with Shin Ando. Following strong forwards carries by Steven Morse and Tom Shirt, the flying Frenchman Bert Debeuf made his one and only catch of the day and dotted down in the corner. Finsbury did not let up and, at the 16 minute mark, debutant Freddie Barton gassed the aged winger on the outside and scored his first try of the match. Several minutes later, John ‘Pompy’ Portsmouth completed his slow walk up the pitch and slotted the conversion. Enfield rallied with some strong forward carries, but were chopped down every time by hooker Johnny Musson and Max de Podesta. Finsbury were unrelenting, with tries by new winger Luke ‘Showboat’ Baldwin and a second from Freddie Barton, shortly followed. Pompy confirmed his status as top kicker from directly in front of the posts and completed a second conversion. At 35 minutes the Venezuelan juggernaut Waldo Castillo decided it was time to put the game to bed. With a terminator-esque run, he sent Ignations players flying like an arepa off a spatula. 29-0 to the Mighty Fins.

After a rousing half time team talk, the Fins were back out and hunting for more trys. Following some slick handling from John Portsmouth, Luke Baldwn went in at the corner, which Pompy duely converted. In a matter of minutes the Fins Flyer went over for his third try of the day to complete his hatrick. Little did he know, as held up three fingers to players old enough to be his grandfather, that this would be his undoing later on in the day. Pompy added two points, but a series of mistakes in their own half led to Enfield retaining the ball on the Fins try line. Even the brave tackling of Tig Gait couldn’t keep them out and they went over for a deserved five points. On the seventy minute mark Alex ‘Cotton soft’ Cotton decided to channel his inner Waldo and march forward for the line. Super sub Jake Painter was brought on in lieu of the try, and made himself at home in the back row. Evan Gwilliam better watch out – there’s a new 8 in town. Not content with his brace, Freddie decided to give Luke Baldwin a lesson in humility and cooly dotted down for his hatrick. Strong scrummaging from Izzy Turner-Flavius gave Pompy front foot ball. He slipped a nice little inside ball to Waldo, who dotted down for his second try. The remaining Enfield players understandably reluctant to even attempt a tackle. With the game well and truly won, PCDC decided to ignore a three man overlap in pursuit of pure greed and dotted down underneath the sticks. Portsmouth knocked over a couple more conversions, and Toby ‘Shia Laboef’ Birkett probably had a try or something but we’re not sure. Final score 69-5 and a good day at the office all round for Finsbury park 2’s.

A deserved man of the match award for Freddie Barton, and an equally deserved dick of the day winner in Luke Baldwin for running his mouth off in the changing room about how good he was after the game. Izzy kindly obliged and saw off the punishment pint, a pint that could well have been his by right given two knock ons and coming off tired with twenty minutes to go, after Luke slinked off early. I hope you’re thirsty next week Luke…