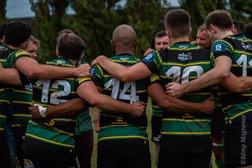 Thus far things have been plain sailing for Finsbury Park. Third week into the London North West League 3 season and we had maximum points, sat a top the table and yet again the big boys in the league. However as every fan of the WWE universe can attest, if Brock Lesner was able end the Undertakers 21-0 streak at wrestle mania, in a competition where the result is a forgone conclusion, then even Finsbury Park's position at the top was no guarantee.

Up against Finchley with a 1-1 record Park knew that this would be the biggest challenge to date and with the wind howling down the ground winning the toss we be a huge advantage. Gaz and I discussed this, we had a plan, take the wind and blow them away in the first half.

Immediately before kick off Frazer Findlater always like to ask the tough questions in the huddle about game plan. I have never had an answer and generally run out the tried and true, let the boys play. This time I had a plan.

Having lost the toss, with the boys staring straight into the wind, let the boys play it was.
From the towering kick off Finsbury Park were able to get down and immediately apply pressure on Finchley, getting control of the ball and camping for 5 minutes in their 22. We won a penalty and I gave Ed the eye, he gave me the nod, and Finsbury Park went ahead 3-0.

Following this powerful start Finsbury Park were to spend the majority of the 1st half stuck on our line. With the wind as a 16th player Finchley unleashed wave after wave of attack, turnovers only provide a small amount of respite. Kicking down field did not gain much territory and a lot of ball was dropped when we tried to run it.

All this did though was force Finsbury park to play its trump card, its defence. Time and time again Finchley found themselves running straight into the Walls of Jericho. When Finchley did manage to get on the outside of Park they were met by Gus as our last line of defence who, much like Edge, the R rated superstar, possess one of the best tackles in the game.

Finsbury Park did manage to make a few excursions into Finchley’s territory in the first half. The first resulted from a strong Finsbury Park scrum, the ball was delivered to ‘Smoking Guns’ Green who managed to hold on to the pill for what seemed like an eternity. He was throwing dummies to whoever wanted to buy them, even the ref got an offer at some point, before finally delivering the pass to Finsbury Parks new found thoroughbred Harri Willams. Harri cut the Finchley defence to threads, drew in the full back and put Chris Neels away for the opening try of the game.

This was soon followed up by a piece of brilliance all of his own making as the thoroughbred (Harri Williams) managed to score from the halfway line. The boot, Ed Morden adding the extras.

With the first half winding down and Finsbury Park in a strong position, Alex Wood took it upon himself to make the game a bit more interesting. Hands on the ball in a formed ruck, that’s a penalty. If you have a ref who wants to even the game up, that’s also 10 in the bin.
That though only allowed Park to flex its defensive muscle once again. Though as Chris Jericho’s walls started to creak with Park hard on their own line and desperately short of numbers, Morgan Carter Tocny came up with the play of the game, he picked off Finchley’s pass and went 90m. Though he didn’t score it allowed Park to close the half off with a soul destroying 15-0 lead over Finchley, turning with the wind.
The halftime oranges went well. Gaz fired the boys, with the wind behind us it was time to run up a score on these boys.
As we set to take the kick off the wind died away and would stay away for the remainder of the game.

To make it worse, Park lost the kick off and Finchley were hot on attack. They broke the line and a nice little 2 on 1 had the R rated superstar beat, but like any good wrestler Gus had a few more moves in his arsenal and somehow, using a lowered version of the double clothesline was able to stop both passer and receiver.

Though Finchley did eventually score during this period of play, Park had again shown them just how hard it would be.
From the next kick off Park managed to recover the ball and went to work. 10 minutes of good phase play and relentless attack resulted in the Brothers of Destruction combining for Mike Woods opening try of the season. Ed again able to knock it through the ball through the posts with a bit of sweet chin music.

From the restart Park were immediately back down the field with Finchley starting to tire. When Finchley were able to turn the ball over they were only able to clear it as far Charlie, who to this observer looks a lot like Rey Mysterio. He was able to unleash his own mesmerising performance from 40m out and score. Ed, the million-dollar man, again adding the extras.
At 29-5 it was now time to run up this score.

Similar to the infamous Hell in a Cell match between the Undertaker and Mankind, Finchley probably felt as though the floor had fallen out from under them but like Mankind after that 25 foot drop they got back up and kept fighting all the way through to the end.
It ended as a 29-5 win to Finsbury Park.

For a bloke that’s been here 5 years this was one of the best performances I had ever been a part of at Finsbury Park. Any person from 1-18 could have got MOM but that special gong went to the real runner and gunner, Chris Green.

DOD was more contentious but equally fair. For the worst try celebration of all time, Dan Brett (who from above you will have noted did not score his own try) pipped the walking yellow card Alex Wood for it.

On to Harrow boys and as has already been said, lets bring the pain.