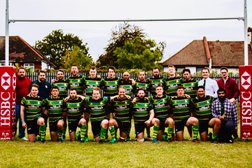 This Is My Swamp

The day dawned cold, overcast and wet, ominous to the battle that was soon to be commencing. The Fins players awoke with fire in their hearts knowing that the biggest game of the season was on the horizon. As we arrived at the field, we realised that the overnight rainstorm had turned Fortress Downhills into Shrek’s Swamp [bizarrely THE Shrek was nowhere to be seen]. As the Old Streetonians arrived, shouts of “this is ma swamp” rang out, intimidating our opponents as they wandered into our immaculate changing rooms. Jokes rang out until Gaz sent the “finishers” out onto the field to ‘warm up’ by remove some of the standing water from the pitch. Chaz, joked that he would be impersonating Faf and entertain the crowd with a swim in his most elegant of budgie smugglers.
With a record crowd of almost 20 people watching from the side line, the game began with a stunning kick from Hugo and a throaty roar from the supporters. Old Streetonians caught and so began the battle by marching up the field and gathering a penalty on Fins 22. The field went quiet as the Old Streetonians kicker lined up the ball and slotted it straight through the posts. 0-3.
The game restarted and with some heroic defence from the Fins boys forcing a kick deep into the 22, Gus ‘the gazelle’ darted through a couple players with a step taken straight from strictly come dancing’s finest foxtrot, setting a string of forwards play as our boys set up a platform for a box kick to be sent over the top for Lloydinho to chase. However, not all went to plan with the kick blocked by an unbelievably tall Old Streetonian who, doing his best to impersonate Stewart McInally caught the ball and sauntered over the try line. 0-10.
6 minutes of brutal, muddy play followed, with the Fins boys getting forced backwards one step at a time, leading to a nifty set of runs from our opposition which set up their 3rd Try in the corner. 0-15.
This trend continued with a swiftly followed Old Streetonian try. 0-22.
With the game feeling as though it might be slipping away, Gaz, giving his classic, “you don’t f*cking loose this game” talk behind the posts, Fins mounted their attack. One can only describe the following 40 minutes as D-day mark 2, the allies (fins), unlike the French began to fight back. It all began with a scrum which destroyed the Old Streetonians, folding under the pressure of two continental plates smashing together. This brought the penalty and with a slick bit of backs play off a perfect line out, led to a Lloyd try in the corner. 5-22. Halftime.
During the halftime break Gaz told us we can win this game and we believed it, the game had turned, and it was time to put some points on the board. Evan “braveheart” Gwilliam gave the speech of a lifetime and we ran back into position with fire in our hearts. Our dominant performance began with a marginal side line call by Luke “didn’t see nothing” Baldwin which set up a forwards dominated passage of play where our big lads drove forward eating away at the meters and turning our possession into points with Chaz “the bulldozer” Dempsey smashing over the line scattering old streetonians like skittles in a bowling alley. Ed ‘Iron Boot’ Morden banged over the conversion and the fight was on. 12-22.
What followed was a testing and brutal passage of play, with a pitch that was increasingly resembling the Somme, leading to some back and forth play between the two teams. Special credit goes to Charlie “the salmon” who made darting run after darting run, tearing up the opposition centres like a hot knife through butter. With all players on the field resembling mud monsters, it looked as though even Arial and mum's finest washing cycle wouldn’t be able to clean the lads, so Gaz brought on, arguably Finsbury’s finest finisher, Luke “Clean Shorts” Baldwin to provide the impetus to get us over the line. With green shorts shining like the fires of Gondor, he sprinted onto the field, and immediately had an impact, giving away a penalty with a cheeky shoulder to the head of the opposition 10. However, all was not lost as again the green shorts lifted the team with the ref awarding a penalty 15m out from the posts. Evan turned to his main kicking man, Ed Morden, and asked him to front up as Hugo had somehow melded into the background of the group. Silence covered the field as Ed stepped up and banged the goal through the posts. 15-22.
Final play. The restart landed in Luke “Velcro Arms” Baldwin’s hands and so began the Finsbury march up the field. Like David and Goliath, the mighty fins gained ground with big carriers from the forwards and darting runs from the back. Penalties, flying around the place, we kick for the corner. With the fans began chanting “don’t drop the ball, don’t drop the ball”, a lineout was taken and the rolling maul began, until, Chris “ball went backwards” Neels managed to drop the ball in the maul, however, the ref taking pity on the gangly lock shouted “backwards” and the drive was on. The Fins Boys peppered a staunch defence with heavy runs until our number one man Chaz “the destroyer” Dempsey drove over the line. 20-22. Ed Morden again stepped up to the plate and banged the ball through the sticks. 22-22 Final whistle.
A great team draw against a brilliant opponent. Bring on next year. A deserved man of the match for Charlie, and a less deserving dick of the day for Luke Baldwin.
Share via
FacebookTwitter
https://www.finsburyparkrfc.co
Recent news