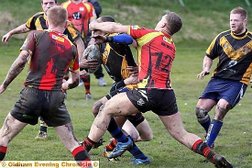 Bulldogs miss out in last-ditch gamble

FITTON Hill Bulldogs turned down the chance to seal a draw in gunning for a late winning try — and just fell short.

The 16-14 loss to Wigan Bulldogs in North-West Men’s League, Division Three, came after the home side opted to run rather than kick a penalty in the final minute.

Despite the best efforts of man-of-the-match Chris Jones — who crashed over from 30 yards to score his first Fitton Hill try — the afternoon ended in disappointment.

The Wigan side took the lead with an interception try before Chris Regan answered with a well-taken effort, converted by Anthony Hilton.

Skipper Paul Turner collected his own chip over the top to run in and make it 10-4 at half-time in Fitton Hill’s favour.

With Aaron Fleming in the sin-bin for retaliation after an alleged bite, the visitors went over twice either side of Jones’s try. And despite the best efforts of the likes of outstanding pair Turner and Sean Stubbs, Fitton Hill ultimately fell short.