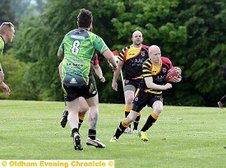 Great game for the dogs!

RING-RUST certainly wasn’t an issue for Fitton Hill Bulldogs as they returned from a three-week lay-off to beat Burtonwood Bridge 50-30 in the North-West Men’s League Division Three.

After falling behind to an early converted try from the visitors, Fitton Hill hit back with skipper Paul Turner going over.

Anthony Hilton kicked the extras, the first of seven successful attempts during the game.

However, the latter was sandwiched between two tries from Burtonwood, who were gifted too much possession.

With a half-time lead of 24-18, the Bulldogs pushed on after the restart as debut boy Chris Tomlinson registered a score.

Big Chris Jones than crashed over under the posts, and almost straight from the restart, Rob Godley ran 60 yards to set up the position for Arran Fleming to cross.