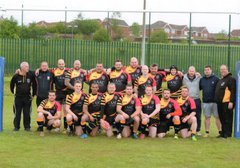 IMPRESSIVE Fitton Hill reversed an early-season defeat at the hands of Bolton Mets with a well-deserved 36-18 home victory in a physical encounter.

The Bulldogs were quick out of the blocks in their latest North-West Men’s League Division Three clash, with star man Josh Hulme diving over for what was the first of a hat-trick of tries. Anthony Hilton added the conversion.

Bolton replied with a score of their own before the Bulldogs’ forwards started to gain the upper hand and Rob Froggat crashed over, converting his own try. Hulme then went over again following good approach play from Sam Lambert and the tireless Chris Regan. Froggat converted again as he was to end the day with five goals.

Bolton’s veteran stand-off scored on the stroke of half-time to make it 18-12 at the interval.

A superb 50-yard break from the rampaging Froggat paved the way for an easy touchdown ffrom Aran Flemming. Shortly after, Chris Tomlins ran on to a short pass before carrying three Bolton defenders over the line with him.

That was before Bolton grabbed themselves another well-deserved try.

Hulme sealed another welcome victory when he grabbed another try, scorching over the line to register his second hat-trick in as many weeks.