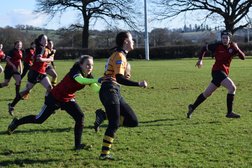 Great morning for Five Ways Women and Girls followed by a packed Club House for the Italy V England game.

It was an early start for all the volunteers of the Junior Girls rugby event. Setting up both pitches and the Club house ready for 60 junior rugby players to play.

Our 2nd team pitch held 2 half pitch games teams of under 13's and 18's with the first team pitch hosting an under 15's game.

The Captain of Five Ways OE Junior Girls Imani had this to day about the morning:

"We enjoyed working with the other teams and building up bonds with the other girls outside of the club.
The under 13s felt they did really well with scrumming and made some great runs. We felt the under 15s made some great runs, broke through a lot of defensive walls. We also chased up the ball from kicks and worked well on the floor.
We enjoyed ourselves and playing as a team regardless of the scores!"

Following the successful morning, Five Ways Junior Girls stuck around to welcome the Ladies team onto the pitch for their League match V Rugby Lionesses.

It was an extremely muddy game after the recent bad weather and the forwards felt the full effect of this with many scrums on the soft ground. Five Ways had a strong start with an early try scored by Steph Clarke at 13 who finished the game with an impressive tally of 4 tries. Rachel Faull-Brown (10) also added to the try tally and Anna Macdonell (12) managed a Birthday try.

The end of the first half saw Winger Ella Pumford cut an impressive run up the wing which helped secure her Player's Player. Joy Potter (7) earned Coaches player for her relentless work from the first to the last minute.

The end of the second half saw a string of bad discipline around the ruck by Five Ways resulting in a try for the Lionesses and some choice advice from coach Alex Nock (IF YOU CAN'T ENTER A RUCK LEGALLY, DON'T *BEEP* ENTER IT!).

The final score was 34-5 to Five Ways, made all the better by some great support on the side lines from family, friends and the girls team!

The day was rounded off with a full club house for England's opening Six Nations game and plenty of food and drinks!