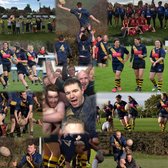 Welcome to the New Season!

A note from the Chairman

To all Five Ways Members - new or former, Friends and Family

On the eve of a new season, my first as Chairman of Five Ways rugby, it's great to be able to sit here and look forward with a huge sense of optimism. When we think it's less than a year since the men's side dropped out of the RFU leagues and, make no mistake, there was a serious threat to our very existence then, to be sat here where we are now is nothing less than extraordinary!

The men kick off their season tomorrow away at Edwardians in our first match in the GB Merit leagues. From a position of not being able to field a side to having more than enough players in just a few short months is fantastic. Seeing the numbers at training grow and grow, sometimes with 2 sessions a week, has been brilliant and I thank all those players for their commitment and dedication over the summer. Of course the job isn't finished yet and it's important we maintain that momentum into the season but it's certainly put us in a great position to start things off.

The club should continue to be incredibly grateful to the coaching team of Chris, Dave and Melfyn as well as manager Dai for reminding them, and the club as a whole, of the values, spirit and team ethos that our club has previously been built on. It's been great to see a growing bond between the players both on and off the pitch - something that can only help us be successful moving forwards.

Tomorrow also marks the first official match under the leadership of new captain Simon Densham. Since Simon took on the role at the AGM, I have been incredibly impressed with the enthusiasm and passion with which he has approached captaincy. His will to succeed and to make Five Ways a better all round place to be is fantastic and i'm sure he has all the qualities to be a great success as 1st XV skipper.

The ladies section kick off their season on Sunday afternoon at home to Sutton Coldfield. It's been another great pre-season for the ladies, building on the success of last year's third placed finish, with recruitment having gone well and continuously great numbers at training. Thank you to all the ladies involved for your commitment and dedication so far.

It's great to welcome back Dave Potter to the coaching team carrying on from the great work Ian Chaston had done with the backs and brining his varied experience and expertise to the squad as a whole. Supporting the team, thanks must go to Triona Johnston who has continued to take on the task of managing the behind the scenes stuff allowing the captain to focus on the playing side. Tri's continued commitment to the cause despite injury makes her a vital and invaluable member of the club.

Technically, the ladies will also take to the field with a new captain as, despite doing it as injury cover last year, Zara Juffkins officially takes the reigns on a permanent basis for this season. However, having lead the team with great success already, Zara will be picking up where she left off in April. A key member of our forwards pack, Zara leads by example and is another one who's enthusiasm inspires those around to follow her.

Away from adult rugby, there's plenty of other things going on with Kat Baldwin having taken over the running of our Junior girls section and Joy Potter taking on the micros. Whilst I haven't been as close to those as I might have been previously, it's certainly my intention to get down and see the great work going on in those areas at some point in the season and again I thank all the volunteers for helping those sections to continue to build.

We have a number of other key volunteers taking on new roles or continuing with ones they've done previously. There are so many good people doing vital things that I don't want to individually thank all of them as I may miss someone and we'll be here all day. But to everyone who is helping out with anything, big or small, I thank you on behalf of the club for all your contributions. They are all truly valued. Following on from that, if anyone feels they have something to add to the club in any capacity, please do come and talk to us. The more volunteers we have the better we can make Five Ways rugby!

So the groundwork has been done, the right people are in the right roles and it promises to be a great and exciting season. But, if we have learned anything from our lessons of the past, it must be to not rest upon our laurels and continue to build and move forwards. Both men's and women's teams had more than enough players for their games this weekend with some players unfortunately missing out due to league rules. That's great in some ways but also we must push to grow both squads to have "2nd teams" in order to maximise game time for all that want it. So please everyone, keep on the lookout for players, keep bringing your mates down to give rugby a go and keep making Five Ways a fun place to play both on and off the field. And, most importantly, continue to enjoy it for yourselves. I truly believe that we have started to turn the corner at the club and are well on the way to restoring the club to past great levels in keeping with our proud history. To be part of that in whatever way is a really exciting opportunity.

To all those taking to the field tomorrow, Sunday or over the coming weeks, thank you and good luck to you. Play hard and to win but above all else, make sure you enjoy it. I know you'll all do the club proud!