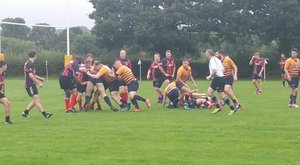 Five Ways start the season with a bang!

Five Ways started their season off with a home game against Essington. Neither team had met before so was a good test to see how far Five Ways had come in pre-season.

Notoriously slow starters, Five Ways wanted to prove they can play from the first whistle and successfully did this. Early pressure from FW drove the away team back into their 22 for much of the first 20mins. This pressure took its toll as some good phase play from the forwards lead to the ball being passed through the backs hands for Jess Banner to cross for the first try of the game. The extras were added.

This gave FW real confidence and from the restart continued with the high tempo. The conditions stuttered any consistent play but Five Ways managed to control it better. The boot of John Mounter was working well for FW and he continued to pin the away team back in their own 22. FW using this as a platform applied the pressure and got the ball out wide, after an initial back was halted short of the line debutant Ollie Smith came charging through from 5m out and crashed over the line for the second try of the game. Unfortunately, the extras couldn’t be added.

The second half started in much the same way, pressure being applied by FW and Essingtion doing what they could to get the ball out of their half.

Essington were penalised and used the boot of John Mounter to pin the away team in the corner. Five Ways won their lineout and the forwards started the drive. The away team were penalised for bringing it down and were further punished when the referee brought out the yellow card. With Essington down the 14 and on the back foot, FW went to the corner again. This time the drive was just as successful and ended with Aiden Ruddock crossing over in the corner, no extras added.

Five Ways confidence was high and they continued to attack and defend in units, keeping the structure they had been working on all pre-season. After some good breaks it fell to Nell Davies who used a lovely spin to avoid the tackle and was bundled over the line for the bonus point try. Again the extras couldn’t be add.

Essington managed to pull back a try in the closing stages as FW tired but managed to keep them out until the final whistle.

All in all a great start to the season and lots of positives to be taken along with some work-ons. We also saw 4 debuts, Joe Callaghan, Ollie Smith, JP Hopkins and Richard Sollom. All had great games and will really improve Five Ways for the coming season.