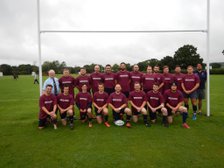 Five Ways back to winning ways.

Five Ways bounce back from defeat to beat Wednesbury.

The 29th October marked a big occasion in the Five Ways calendar. Two teams out, at home and the first VP day of the season. There were several changes in personnel this week, with several players lining up in less familiar positions but, seeking to build on the strong performance of the previous week, there was still a sense of confidence and optimism leading into the game which was not dampened by the pre-game drizzle. Nor, indeed were the spirits of the old boys, who were in good voice from the off. The 1sts came up against a big Wednesbury side, and it soon became clear that this would be a tough, physical battle.

With Five Ways receiving the kick off, they looked strong from the start. With Ben Ernstzen, who came in at 10 this week, darting through the Wednesbury defence early on to provide Five Ways with excellent early field position. After several phases of strong running from the Five Ways pack, second row Craig Davies found a hole in the defence from close range and crossed for an early try. With captain Ian Chaston adding the extras, the early 7-0 lead (along with money spent in the clubhouse) was good cause for the old lads to cheer on this big home fixture.

There were however, early worries as fellow second rower, Aiden Ruddock had to leave the field due to injury shortly afterwards. With Kyle Mitchell moving forward from the flank to fill the, somewhat large, hole that was left, the pack continued to work well as a unit. The front five in particular, using their recent coaching in the scrum to good effect to put on a strong scrummaging performance against a much larger eight.

The early lead was shortly cut as Five Ways conceded a penalty in a kickable position, which was put away comfortably, keeping Wednesbury close to Ways. This would be the last points that Wednesbury would take in the first 40, with excellent tactical kicking from the likes of John Mounter keeping the travelling side pinned in their own territory for much of the first half.

The strain began to tell in the Wednesbury defence as they conceded a penalty within their 22. A clever attempt at a quick tap from scrum half, Tom Griffiths was thwarted by a Wednesbury prop, who was subsequently sent to the bin for not retreating 10. With the extra man in the pack, the obvious choice was to kick to the corner. The catch and drive unfortunately proved ineffective but the pressure was maintained on the Wednesbury defence who continued to concede penalties in the red zone. Eventually this was taken advantage of, as another tap and go was capitalised on by Matthew Maughan, who showed great power and strength to carry three Wednesbury players over on route to the line.

The rest of the half continued in similar fashion, with the backs seeing precious little ball. The five ways pack however, maintained the pressure on the Wednesbury defence, who continued to give away penalties in dangerous areas. It was only a matter of time before this would cost the away side. With Craig Davies tapping and going he crossed over once again in a dazzling effort, weaving through the defence and flopping over the line for his second from all of five yards. With the conversion effort unsuccessful the scores were left at 17 points to 3 in favour of Ways, and that was that for the first 40.

If the first half saw much of the pressure coming from the home side, the second 40 was an entirely different kettle of fish! With Five Ways repeatedly penalised at the breakdown, the majority of the second half was played inside the Five Ways half. The strong carries from the Wednesbury pack was met with a water tight defence.

However, with Kyle Mitchell was sent to the touchline for 10 minutes for obstructing a Wednesbury attack, Ways could not keep the Wednesbury out indefinitely. The continual bombardment of the Five Ways defence eventually proved effective, with one of the big Wednesbury lads powering over to bring them right back into the game. With the conversion successful, Wednesbury moved to within one converted try of the home side at 17-10.
The rest of the second half continued in a similar vein. Yet the five ways defence proved strong. The heart rates of the home supporters was raised as Wednesbury looked certain to score in the corner, only to be denied by an excellent covering tackle from number 8, Rob Wigley, in an effort that typified his performance. Such was his work rate from start to finish.

Indeed the same can be said of the entire Five Ways side, from 1-15. The backs who had little opportunity to play with ball in hand in the first half, saw even less in the second 40 yet didn’t allow the frustration to get to them and put in a defensive performance they can be truly proud of!

Having conceded one try in the second half already, there was a determination not to allow another player over the whitewash and for the rest of the second half the big runners from Wednesbury were kept at bay, and with Wednesbury seemingly unwilling to use their outside backs, they were unable to break down a strong defence.

Mention must be made of the Five Ways scrum, which was strong in the first half, seemed to improve with each opportunity. With the Wednesbury pack nudged back multiple times on their own put in, this was a vital source of penalties for Five Ways, which John Mounter kicked excellently to push Wednesbury back into their own half and relieve the pressure on the Five Ways defence

Tom Griffiths could just as well have been Matt Dawson (the greatest British scrum half of the professional era, as I’m sure Griffo would agree) as he smartly picked up from the base of a ruck and made an excellent break into the Wednesbury half. This gave Five Ways possession within the Wednesbury half which was indeed a rarity in the second half. This proved valuable as Wednesbury conceded a penalty (I am unable to recall the exact events leading to this) which Chaston knocked over.

Five Ways were awarded another penalty in a kickable position in the second half which was also put away but I can’t for the life of me bring it to mind. Either way, these moved the scores to 23-10 to Ways, and the win was now almost a certainty. The only thing left now was to pick up the bonus point try.

This looked like a possibility as Five Ways were awarded a penalty within the Wednesbury 22 with less than five minutes remaining. However, the Wednesbury player threw the ball at a Five Ways player in frustration which led to a fracas. The referee deeming Tom Griffiths to be the main perpetrator (a decision which baffled all and sundry), he too saw yellow.

Five Ways discipline (or lack of) let them down in the closing minutes as George Leech decided that 75 minutes was long enough to play rugby, and he too saw yellow for a dangerous tackle. Within what could not have been more than 10 seconds of this, Matt Williamson, thinking he was in an ice hockey match, was given his marching orders for the same offence!

Finishing the match with 12 player on the field left a sour taste in the mouth of the home side, who failed to pick up the bonus point, but came away from the match with a valuable win.