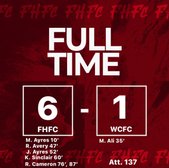 After two disappointing results a big reaction was needed, and the boys delivered.

The game started brightly with the Reds holding a lot of possession, playing some slick football and creating some good chances.

M. Ayres opened the scoring after a burst down the right from sibling Jamie, his cut back was touched in to M. Ayres who made no mistake, striking low in to the far corner.

This spurred Wallingford and despite heavy Red possession they managed to create a few half chances. Their persistence paid off when a long ball wasn’t dealt with by the Red back line and Mo Ali made no mistake, punishing Heath with the equaliser.

The boys came out firing after the break and on 47 minutes Ryan Avery found his cross from the right hand side sneaking past the keeper to give the Reds the lead once more.

The Red possession wore on and 5 minutes later J. Ayres got in on the act with an unchallenged header finding the back of the net, 3-1.

As Wallingfords heads dropped and weariness set in Heath started to press, Sinclair was rewarded with a fine solo effort, beating two defenders and sending a sweetly struck shot last the keeper, 4-1.

Despite a tireless effort from Reece Cameron, giving the defenders all sorts of trouble and bringing other players in to the game, it was looking like he wouldn’t get the goal he deserved.

On the 76th minute however Colin Mugoy-Tabingwa crossed only for a defender to deflect in to the path of Cameron, this time he made no mistake, smashing home the rebound for the Reds fifth, 5-1.

To round it all off Cameron got his second when the away keeper rushed out to clear a ball, his scuffed strike fell to Cameron who took a touch, set himself and sent a perfectly lifted chip in to the top right corner, leaving the keeper in no man’s land, 6-1.

Our thanks to Wallingford & Crowmarsh FC,l and we look forward to the return fixture later in the season.