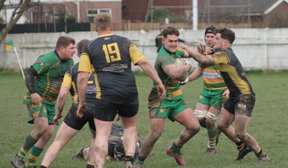 Fleetwood were a shadow of the side that won so well last week at Aldwinians.

Only 7 of last weeks starters were available this week so a number of lads stepped up from the seconds. It took some time to gel as a team but the second half performance was one that they can all be proud of. Toc H started well playing into the strong wind and were soon 21-0 up. Their strong running back row and centres were causing Fleetwood problems every time they were in possession. Against the run of play Tom Evans scored for Fleetwood but a further 3 tries gave Toc H a commanding 40-5 half time lead.

This could have seen the capitulation of many teams. Playing into a gale most Fleetwood supporters were dreading the second half. However, the team rallied and showed great resilience. Fleet almost scored from the kick off with the ball held up on the Toc H line. Fleetwood also began to assert some dominance in the scrum. For 20 minutes there was no score so that when the visitors won a penalty they kicked it rather than go for a try. 5-43. Two further converted tries in the last 10 minutes extended their lead before Fleet gained a consolation try in the left hand corner. Final score 10-57

While it must be acknowledged that this was a heavy defeat and Didsbury were by far the better side credit must go to the makeshift Fleetwood side. Everyone put in a good shift, played to the best of their ability and gave 100%. George Orry in particular continued his good run of form with another 80 minutes of high octane effort.

Next week we are playing at Oldham in a rearranged match, postponed earlier this season when their pitch was waterlogged.