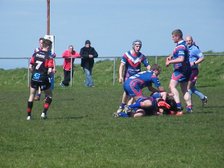 STALEMATE ON THE PIT FIELD

In a see saw battle on the pit field, either team could have walked away with the points, when a young and very fast Kells A team Hosted Flimby in this CARL Division 1 game.

Kells started the livelier of the two teams and with 17 minutes on the clock found themselves 12 points to the good through a nice brace 3 minutes apart from Loose forward Jake Parker, both of which he converted himself.

With Kells ruling the roost for the first 20 minutes, the second 20 went Flimby’s way with converted tries through prop Luke Baker, and scrum half Dean Scholey, followed by a lovely try on 39 minutes through centre Carl Grima who raced from the half way line shrugging off defenders to score and give Flimby a 12-16 half time lead.

Kells started the second half pretty much as the first and within five minutes of the re-start took a 22-16 lead through two tries in quick succession by Lloyd O’niel and Nathan Mann, the second being converted by Grant Gainford.

On 51 minutes Carl Grima produced another fine run to score his second of the afternoon right under the posts, unfortunately, he had to leave the field immediately after scoring due to aggravating a previous knee injury, having previously lost Luke Eve early in the first half due to a broken nose, Flimby’s substitutes were quickly running out.

The last 20 minutes of the game saw end to rugby with chances going begging for both sides, however the drama was still not over as Flimby lost prop Kieran Burridge who had to be taken to hospital with a fractured eye socket after being caught with an elbow, and with just under 10 minutes left veteran Kells forward Lee Rutherford was lucky not to receive a red and only be despatched to the sin bin for a trip on Flimby’s young hooker Ethan Williams.

With less than a minute remaining, Dean Scholey attempted a drop for the visitors however it was off the mark, and when the ref blew for full time the score remained at a 28 apiece draw.