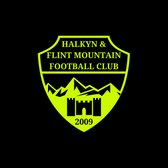 What a year it has been. After the completion of the 2018/2019, Flint Mountain have a fabulous quadruple of trophies in the cabinet, including their first ever league title after finishing top of the North East Wales League unbeaten. The league win sees the club promoted to the Welsh National League Division One for the first time. This achievement could not have been possible without the extremely generous and continued support of our sponsors Double Time Distribution, Gilmour Brothers Transport, Expert Distribution and Polyroof Products.

In order to secure promotion to the Welsh National League, the club have secured the facilities at Pant Newydd in Halkyn, formally home to now folded senior side, Halkyn United, which will become the club's new permanent home. Not only do these facilities provide the necessary criteria for tier four, they also have most of the criteria to achieve any future promotions.

As part of this move to Halkyn, the club will be renamed HALKYN & FLINT MOUNTAIN FOOTBALL CLUB. The club have also taken on three new committee members, Don Barker, Ray Roberts and Steve Johnson, who were previously part of the former Halkyn United committee. We are delighted to welcome aboard the trio, who allowed the use of the Pant Newydd facilities to us. They will join the existing club committee, as we build for next season and beyond.