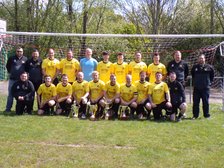 While the result was not what was wanted last weekend, Mountain did produce an outstanding performance against Bangor 1876 and looked to take that back into league action with a visit of Cefn Mawr Rangers to Pant Newydd. Cefn have had a mixed start to the season, starting slowly but results had picked up recently. Manager Rob Marshall gave debuts to new signings Jack Abraham and Tyler Williams, while Lee Messham also started.

Mountain were on the front foot from the start and eventually took the lead after 19 minutes. Jack Abraham fed a through ball to Aled Reece that split open the Cefn defence. Reece bore down on goal, but unselfishly played a square pass to Lucas Cruz, who fired low past the goalkeeper. The lead didn't last long as Cefn Mawr took advantage of a defensive mix-up to equalise. Colin Davies looked to head a back-pass to goalkeeper Danny Stanton, but headed straight to Cefn's striker and he could not miss.

Cefn could have then took the lead, but Danny Stanton pushed a shot onto the crossbar. It was then Mountain who retook the lead. In front of goal, Phil Lloyd weaved past two defenders before being barged to the ground just outside the box. With Lloyd wanting a free kick, Lee Messham kept going. He picked up the ball, rounded the keeper and tapped into the net for his first of the season.

Despite leading going into the second half, Mountain knew that they could be better and flew out of the traps from the whistle, extending their lead after just 30 seconds of the half. Working the ball down the right, the ball was fed into Aled Reece. He found Lee Messham, who fired a low cross to the back post, where Phil Lloyd was on hand to turn the ball high into the net. Just four minutes later, Mountain had a fourth. Aled Reece was again provider, feeding the ball through to Paul Williams, who strode through the defence. He collected the ball, took the ball round the keeper and found the net.

It could've been more for Mountain, but Jack Abraham was denied a debut goal when his vicious shot was tipped onto the crossbar. As the half drew on, Cefn pressed for another way back into the match, but could fashion any clear cut chances and Mountain secured the win.