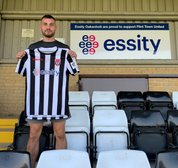 Ben Nash is the latest arrival to the Essity Stadium

We are delighted to welcome Ben Nash to the club, who is our latest signing, and is another quality addition to the squad.

Ben is a well regarded central defender, who joins from Rhyl. He came through the ranks at Connah's Quay Nomads, and made his first team debut for them in December 2014 against The New Saints at Park Hall. He has also represented Wales at U18 level and was part of the Gap Coleg Cambria side who won the U19 National Colleges Final in May 2015.
He eventually left The Nomads in late 2016, joining Denbigh Town, before moving on to Rhyl for the start of the 2018/19 season. At the end of that season, his performances for the Lilywhites saw him receive the Players', Manager's and Directors' awards for Player of the Season.
Still only 21, Ben has a very promising future ahead of him, and should prove to be a valuable member of the Flint squad.
Share via
FacebookTwitter
https://www.pitchero.com/clubs
Recent news