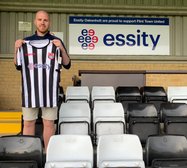 Ex-Caernarfon Town player Nathan Craig, who announced his decision to leave the Canaries last week is the latest arrival at the Essity Stadium.

Nathan joined Everton at the age of 12 and, having progressed through the youth team ranks, he was offered a place as a first-year scholar in the summer of 2008. A deadball specialist, he became a regular in the Under-18s during the 2008/09 season. His versatility down the left flank and set-piece delivery saw him progress to Everton's reserves in the 2009/2010 and he became a regular for the reserves during the 2010/2011 season. He made his competitive first-team debut versus BATE Borisov on 17 December 2009 in the UEFA Europa League.
After being released by Everton in the summer of 2011, he joined up with home town club Caernarfon Town. Following a successful trial in 2012 he joined Torquay United and went on to make 47 appearances, scoring 1 goal. On the club's relegation to the Conference in May 2014, he, along with seven other teammates, was placed on the transfer list. On 7 June 2014 following the player's request, his contract was mutually terminated.
Nathan then returned to Caernarfon, scoring 14 goals in the first 18 games of the 16/17 season. This was followed by an excellent return of 21 goals in 26 games in 2017/2018. He also scored 13 league goals as Caernarfon returned to the Welsh premier league in 18/19, with the team finishing an impressive 4th and qualifying for the Europa league play off. As well as appearing for Wales U17's, Nathan played for the U21 side, making his debut against Bosnia and Herzegovina in October 2009.
He is a renowned dead ball specialist, and will bring plenty of experience and guile to Flint's squad.
Share via
FacebookTwitter
https://www.pitchero.com/clubs
Recent news