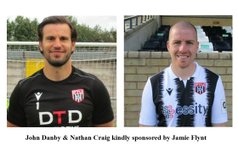 Jamie Flynt, a USA fan based in Alabama has kindly agreed to sponsor both John Danby and Nathan Craig for the season.

Jamie contacted us about Player Sponsorships and revealed that her ancestors originated from this part of north Wales, arriving in the US in the 1600's. So they must have among the early settlers who made the journey across the Atlantic.
She explained that her ancestors arrived in America 13 generations ago via Richard Flynt, around 1652, and she believes he came from the Flint area. His great grandson, Richard, served during the American Revolution along with his two sons.
The family initially went to Virginia, but then made their move through North Carolina and finally settled in Tennessee where most of the Flynt family lives today. Jamie currently resides 40 miles south of the Tennessee hometown, in Huntsville, Alabama and works as an engineer.
We are very grateful for Jamie's support, and it's fascinating that she is able to trace her roots back to this area.
Share via
FacebookTwitter
https://www.pitchero.com/clubs
Recent news