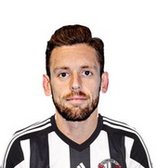 Defender Wes Baynes has signed for Flint from Aberystwyth Town. Amongst his other clubs are Wrexham, Chester and Connah's Quay Nomads.

Born in Chester, Baynes came through the ranks at Wrexham, and made his first-team debut in a 2–2 home draw against Chester City in November 2007. In June 2011 he joined his hometown club Chester.
After 2 seasons at Chester, he joined recently relegated AFC Telford United Conference North for another season. On 26 April 2014 he won promotion to the Conference Premier with Telford after they clinched the Conference North title on the final game of the season. In late September 2014 he joined Colwyn Bay on loan, and subsequently permanently, before signing for Connah's Quay Nomads in the Welsh Premier League. In May 2015, Baynes scored the only goal in the Europa League play-off final against Airbus UK Broughton that sent Nomads into Europe for the first time in their history.
After a couple of seasons with the Nomads, Baynes signed for Airbus UK in the summer of 2017. In January 2018, he returned to the Welsh Premier with Llandudno. At the end of the season, he was released by Llandudno and subsequently signed for Aberystwyth.
Meanwhile, we are delighted to confirm that another three of last season's squad have also committed to Flint for the new season. The evergreen John Davies is joined by Chris Chung-Li and Jordan Barrow in signing up once again for the Silkmen.
Share via
FacebookTwitter
https://www.pitchero.com/clubs
Recent news