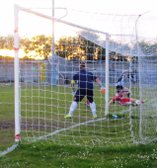 After dominating in normal time, Flint had to endure the drama of penalties but came through 3-2, thanks to two Ross Dalton saves.

A performance full of character from the Silkmen was rightly rewarded, although Gresford made them work very hard and took it to the wire, having equalised with just 4 minutes of normal time to play.
Looking at the team line ups before the game, this looked like it was going to be an uphill struggle for Flint, as they were missing Simon Thelwell, Russ Courtney and Jack Abraham. But to their credit, their replacements stepped up to the plate, and the all round performance was one that the players can be proud of, as they displayed great heart and desire, something which has sorely been missing of late.
The home side carved out the first opening on 12 minutes, when an Abe Dobson free kick from the right was met by John Davies, but his header went back across the goal.
Stewart Carroll pinged in a great cross from the left on the quarter hour mark , that was just headed to safety by a covering defender as Joe Palmer was poised to strike.
Flint opened the scoring after 18 minutes, as Carroll was played in by Kyle Smyth. He rounded Hill-Dunt, only to be brought down, and Paul McManus dispatched the resulting penalty.
Play-maker Carroll found Palmer with an exquisite lob, as Flint continued to take the game to their opponents. The young forward displayed a great first touch to bring the ball down, but then hit a tame shot wide.
A further chance went begging for the home side, when a stray back pass by Matty Cook was played into Carroll's path. He had more time than he perhaps realised, and could have composed himself more, but in the end his effort was easily dealt with.
With 5 minutes to go to the break, Dobson found Carroll at the far post with a free kick, but he headed wide.
It had been a fantastic first half performance from Flint who had carved out a string of chances, looked strong at the back, and fully deserved their lead, the only thing missing was the cushion of a second goal.
The Silkmen picked up at he start of the second half from where they had left off, and Palmer headed the ball into the path of Smyth who ran in on goal but shot wide of the target.
A rare mistake by the Flint defence on the hour mark saw a weak clearance go straight to Josh Griffiths 12 yards out, but fortunately for the home side he shot over.
With 4 minutes remaining, Gresford grabbed the goal that they had been threatening during the latter stages. Rhys Lloyd from out wide played a quick, low ball across the 6 yard box, which Owen Roberts was first to react to, getting in at the near post and scoring.
So late in the game, this could have proved a real body blow to the Silkmen, but instead they went straight on the attack, and substitute Liam Randles squared to Smyth in the box, but the Flint hit man squandered the chance.
And so we entered Extra Time. Gresford edged the first period, but the only chance of note was easily dealt with by Dalton, as Roberts tried his luck from the edge of the box.
In the second period of Extra Time, Flint found their second wind, and tried to win the game without having to go to penalties. The best opportunity came on 119 minutes, when a McManus corner found Phil Djan, who was presented with a free header to win the game, but agonisingly failed to connect.
Then we faced the drama and lottery of a penalty shoot out to decide which team would go through to the final. Flint keeper Ross Dalton got the better of his more experienced counterpart, by saving two penalties, with another effort hit over the bar. Flint scored three of their four spot kicks, with Paul McManus, Craig Jones and Joe Culshaw all on target as they booked their final spot.
After going on a losing streak of 7 games, this was a tremendous performance and shows just what we are capable of when we apply ourselves correctly and keep our discipline and shape. A big well done to all the lads for their efforts in restoring some of our battered pride tonight, and we can now look forward to facing Caernarfon Town in the final at Conwy on May 14th.

Flint MOM - Paul McManus (a very difficult choice given the all round team effort but with his endless energy and never say die attitude, McManus exemplified all that was good about Flint tonight)