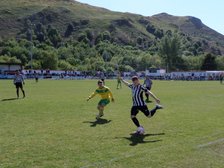 Although they went into this match as firm underdogs, Flint made their opponents work every inch of the way, as they put in a spirited performance.