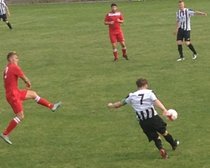 Foulkes fires Flint into Round 2

In a dress rehearsal for next month's Welsh Cup tie, Flint gained the upper hand having come from behind against their gritty opponents.

Richie Foulkes grabbed the winner with just over 20 minutes of the game remaining, a victory that the home side deserved on the day, thanks to their more attacking play.
The opening quarter of an hour or so saw half chances for both sides, neither of which could convert. With 2 minutes on the clock, Kyle Smyth put a close range header wide, following a James Hooper cross.
The visitors then carved out a series of chances. First, following a throw in on 6 minutes, a short cross was pulled back to Paul Griffiths, 12 yards out, but the Llanfair skipper hit his effort wide of the target.
Shortly after, Andrew Jones got the better of Ieuan Hewitt in a one on one and was clean through on goal, only for Ben Jones to distinguish himself with a good save. Then, a long ball caught the Flint defence square, and Jones was through again, only to be once again denied by his namesake in the Flint goal.
With 16 minutes on the clock, Llanfair keeper Chris Brown came out of his box to head clear, only for the ball to find its way to Richie Foulkes, whose 40 yard lob was just over the bar.
Llanfair's tricky forward James Davies, went on a mazy run on 20 minutes, where he turned John Davies inside out, but in the end probably took one touch too many, and shot wide.
Foulkes found Andy Brown with a good ball out wide on 25 minutes, and the left back delivered a cross into the unmarked Hooper, but the Flint forward didn't get the best of contacts on the ball, and his effort was easily collected by Brown.
The visitors drew first blood on 32 minutes, when a ball played into the box caught the Flint defence napping and all at sea. Paul Griffiths pounced on the loose ball and easily slotted home from 12 yards.
The lead was to be short lived, however, as Flint hit back seven minutes later. Hooper delivered a good low cross, and Kyle Smyth applied the perfect finishing touch from a tight angle.
Right on the 45 minute mark, Flint could have gone in front, when Foulkes turned on the edge of the box before hitting a shot that found the post rather than the back of the net.
The second period started in a rather subdued manner, with neither keeper being troubled for the first 20 minutes.
Then, on 67 minutes, Hewitt found Smyth who hit a smart shot from a tight angle, that brought about a good save from Brown.
Just two minutes later, Flint got what proved to be the winner. Hooper was once more the provider, but this time rather than delivering a cross, he had a shot which was blocked and fell into the path of Foulkes, who drove it into the net from 10 yards.
Flint almost put the game to bed on 84 minutes, when substitute Arkadiusz Piskorski found the woodwork again when he hit a shot from an acute angle.
Llanfair's day got worse in stoppage time when Barrie Jon Lloyd, who had been booked just a few minutes earlier, picked up a straight red, for what appeared to be an unsavoury off the ball incident.
For Flint, though, it was a job well done against opponents who always make you work hard for your win, and we look forward to locking horns with them again in a few weeks time for the Welsh Cup game.