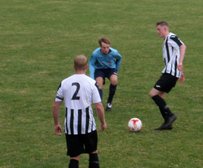 Flint eased into the second round of the Welsh Cup with a comprehensive win over Penycae.

Aden Shannon took the opportunity to shuffle his pack in terms of team selection and handed starts to Andy Brown, Joe Palmer and Louis Austin, all of whom seized their chance to impress with both hands.
The scoring began on 6 minutes, when Chris Li picked the ball up on the right side, and ran unopposed across into the centre, before smashing an unstoppable shot into the net from 25 yards.
On the quarter of an hour mark, Levi Mackin almost repeated the trick, when he hit a shot from a similar distance, but this time Penycae keeper Josh Roberts was able to save his effort.
Three minutes later, Kyle Smyth broke forward for the Silkmen and ran in on goal from the left side, before placing his shot past Roberts, only for a covering defender to get a block on the ball and prevent a goal.
That was only to delay the inevitable, and on 23 minutes, James Hooper played the ball into Andy Brown's path, who was in space down the left. He cut in towards goal, and hit a sublime effort from an acute angle that beat Roberts and doubled Flint's lead.
The visitors had a rare sight of the Flint goal on 38 minutes, when a free kick was half cleared to Conner Kendrick on the edge of the box. He hit a good low shot, but Ben Jones once again showed his agility when he got down well to block the effort.
Flint scored again just before the interval. Louis Austin displayed some great ball control, before threading it through into the path of James Hooper who had made a darting run. Roberts came rushing out to intercept, and the ball broke into the path of Smyth who had raced across to support Hooper. He controlled the loose ball, before calmly picking his spot and firing home from wide in the box.
The game was well and truly put to bed on 50 minutes, when the excellent Brown delivered a perfect cross from the left curling away from the keeper, that Hooper gratefully applied the finishing touch to, with a neat header.
The same combination were at it again, two minutes later, although this time Hooper's effort was a shot which was blocked by a defender.
Although they were being outclassed, to their credit Penycae kept playing football and didn't resort to any overtly physical challenges, and for the next 20 minutes or so, kept Flint at bay.
As the game entered the last quarter, however, the fitness of Flint told over their opponents, and two more goals were scored and several more good opportunities were created.
On 70 minutes, from a corner, Johnny Hill laid down his marker for miss of the season, when from 2 yards in front of an open goal, his flicked effort somehow found the crossbar rather than the back of the net, in a manner more reminiscent of his namesake Benny Hill (with thanks to Will Price for supplying that pun!).
Another great chance went begging a minute later, when substitute Mark Cadwallader, in his first game back from injury put a free header wide, when well placed to score.
With quarter of an hour to go, Cadwallader was again in the thick of the action, when his effort from a a corner was half blocked, but the ball ran into the path of Hill, who this time finished in the manner more akin to Jimmy rather than Benny Hill, as he made amends for his earlier miss, and thumped the ball home.
The scoring spree was rounded off in the 86th minute, when Smyth broke through and squared the ball to Hooper, who tapped home for his second of the game and Flint's sixth.
In what was a good all round team performance, Louis Austin and Andy Brown caught the eye with their attacking play from midfield, and it was great to see Mark Cadwallader returning to the team following his groin injury, and also young Charlie Hughes put in a nice cameo appearance in the last 20 minutes, showing some nice touches.
So a lot of positives to take forward from this display, with the squad now appearing to be knitting together extremely well.