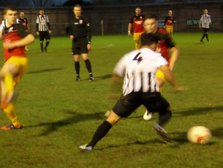 Flint safely into the semis

The Silkmen had 4 changes to their starting line up from their previous game, with Joe Culshaw coming in for the suspended Chris Roberts and youngsters Joe Palmer, Luke Tyson and Ryan Coney all being handed starts. Andy Brown continued in his new found role as target man, and the evidence is that he is really beginning to relish his new position, with two further goals to his name.
Penrhyn had obviously come to try and frustrate Flint, and keep things tight at the back and maybe grab something on the counter. Most of the first half was spent in the opposition half, but the home side were often guilty of over elaborating and playing one pass too many, with the consequence that most of their attacks were too easily thwarted.
With 5 minutes on the clock, the Silkmen put together a good passage of play, with the ball zinging about in the Penrhyn box, and the defence were at full stretch to protect their goal. It eventually ended up at the feet of Brown, who sent his effort wide.
On 18 minutes, Tyson hit a shot along the ground from the edge of the box, that forced keeper Gethin Jenkins to scramble across his goal to save.
Ieuan Hewitt swung in a terrific ball on 35 minutes, but Penrhyn defender Sion James showed great reactions to reach it in the nick of time before Brown, and direct it over his own cross-bar for a corner. A couple of minutes later, Brown flashed a shot over the bar from the edge of the box, as the Silkmen were still unable to find the breakthrough.
Chris Li conceded a free kick some 22 yards out on 38 minutues, and in doing so, offered the visitors their first real sight of the Flint goal. Mark Gornal let fly with a good effort that stung the hands of Ben Jones in the Flint goal.
Two minutes before the break, John Davies lifted a great ball into the path of Brown, who slipped his marker, and found himself in space with only Jenkins to beat. But the Penrhyn keeper spread himself well, to pull off a good save and make sure his side reached the interval still all square.
Flint's central defensive partnership of John Davies and Matty Holt are now starting to really gel together and put in another solid performance, not giving their opponents any openings. It was just a case if at the other end, Flint could carve out the opening that their play warranted.
Tyson set off on a mazy run two minutes into the second half, before hitting a shot that seemed to take Jenkins by surprise, as the keeper made a bit of a meal in scrambling it clear.
The opening goal eventually arrived just before the hour mark, and it came from a Flint corner. Joe Culshaw delivered the ball invitingly for Brown, who crashed in his header from around 6 yards out, to emphatically put his side 1-0 up.
Penrhyn were now forced to change their tactics somewhat, and adopt a more offensive approach, which opened up more spaces in their rearguard that Flint were able to exploit.
On 74 minutes, Li played a clever little ball into Smyth in space out wide on the right, and he in turn delivered an excellent cross that was flicked with the outside of his boot right onto the head of Joe Palmer, who directed it into the corner of the net.
Four minutes later, it was well and truly game over, as the recently introduced James Hopper raced into the left hand side of the box, before hitting a shot across goal that struck the upright. But like any good striker, Brown was following up, and had a simple tap in to claim his second and Flint's third of the game.
So 2016 has ended on a high, with our third consecutive win and we shall look to carry on this form into the New Year when we face local rivals Mold Alex at Cae-Y-Castell next Saturday.