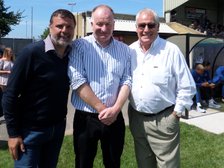 Everton and Flint serve up an entertaining game

Although a tennis style scoreline may have felt fitting in the middle of Wimbledon, it didn't quite tell the full story of this pre-season encounter.

For the opening 45 minutes, Flint more than matched their illustrious opponents, with just a solitary goal separating the teams at half time. Indeed, the Silkmen generally had the better of the opening exchanges , although they failed to seriously test Chris Renshaw in the Everton goal.
Then, with 20 minutes on the clock, a rash challenge inside the box, presented Everton with the chance to open the scoring from the penalty spot. However, Flint keeper Nik Bulmer made the first of several impressive saves during the afternoon, when he kept the spot kick out. As the half wore on, Everton found their feet and started to put some good moves together. They were rewarded on 36 minutes, when Courtney Deffus opened the scoring with a well taken finish.
In the second half, David Unsworth made a raft of changes to his side, and they showed the type of form that made then Premier League 2 champions last season, as they went on to overrun Flint. Everton were particularly ruthless on the counter attack when the home side lost possession in the middle of the park. Further goals came courtesy of Morgan Feeney, and a brace apiece from Boris Matthis and Calum Dyson. Flint scored the most spectacular goal of the afternoon, as from a restart, Phil Doran spotted Louis Gray off his line, and delivered an audacious chip from the halfway line that sailed into the corner of the net.
The large crowd were treated to a great spectacle on a lovely sunny afternoon at Cae-Y-Castell, and no doubt both sides would have learned a great deal from this encounter.
Next up for the Silkmen is the visit of Chester on Tuesday evening, kick off 7-30pm.