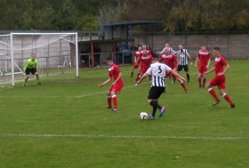 A reasonably comfortable 3-0 home win saw Flint safely book their passage into this season's second round of the Welsh Cup.

Llanfair, shorn of several of last season's players were unable to repeat their heroics of just under 12 months ago, when in the same competition they overturned a 3-0 deficit to emerge as winners by 4-3. Nevertheless, they gave it their all, and manager Rhys Stephens can be pleased with the commitment and attitude shown by his team. But Flint showed a greater defensive solidity, this time around, and coupled with their attacking flair, which came to prominence in the second period, they were full value for the win.
The visitors came out of the blocks in fine style, and with barely a minute on the clock fashioned the first opening of the game. A misplaced pass gave possession to Llanfair dangerman Andrew Hughes, and he charged into the Flint box, shrugging off some half hearted challenges before getting a shot away that was deflected out for a corner. From the corner, Phil Hughes rose highest to connect with the ball, but his header was off target.
Then, on 5 minutes, a wayward clearance, led to the ball landing at the feet of Paul Griffiths who unleashed a stinging shot at the Flint goal, but home keeper Nik Lee-Bulmer spread himself well, to save the shot.
That let off spurred Flint on to gradually take control of the game, and Llanfair adopted a more defensive mode. On 22 minutes, Ieuan Hewitt found Alan Bull with a good pass, and the Flint forward turned his marker before laying the ball into the path of James Hooper, who had a chance to take a first time shot, but delayed, and then when he did hit it, it was not powerful enough to seriously trouble Steffan Jones in the Llanfair goal.
But 3 minutes later Hooper made amends when his tenacity won possession on the right, and he burst into the box closely followed by Matthew Spencer. In his eagerness to win back the ball, Spencer only succeeded in bringing down Hooper, and the referee had no hesitation in pointing to the spot. Richie Foulkes once again stepped up to convert the penalty, as he has done on several occasions already this season.
Flint had by now taken control of the game, and created several half chances in the remaining period of the 1st half, probably the best of which came on 39 minutes. Following a short corner, the industrious Kyle Smyth crossed in a dangerous ball, which was only cleared to the lurking Bull, whose on target effort took a deflection to send the ball out for a corner.
Flint had a couple of wake up calls early on in the second half, when a couple of miscued clearances could have led to far more serious consequences, but fortunately they were able to recover and tidy things up, before Bulmer was called into action. Then, on 50 minutes, the game was effectively over as a contest, as the Silkmen scored their second. Phil Doran made a good run that took him inside the box. Initially, he was dispossessed by a covering defender, but the ball bounced back into his path, and he quickly took full advantage by squaring it across the goal to Bull, who had made space for himself. The Flint forward gratefully accepted the chance, and tucked his shot into the corner of the net from 6 yards, to open his account for the club.
Five minutes later, he almost doubled his tally, as he broke through the Llanfair rearguard, and opted to take his shot early, only to see the agile Jones pull off a good save at full stretch and turn his effort around the post.
Just before the hour mark, Flint added their third. Hooper put in a lovely delivery from the right, which caused chaos just in front of the goal-line as the Llanfair defence attempted to deal with it. Smyth ran in and seized on the loose ball and planted it firmly in the net, to get the goal his performance merited.
This was a purple period for the Silkmen, as they were now well and truly in control of the game. On 67 minutes, Hooper cut in from the right, and curled an effort that had Jones beaten, but, fortunately for the visitors, a covering defender was on hand to clear the ball off the line.
Then, a couple of minutes later, Doran let fly from 18 yards, and Jones just about managed to keep it out, with a little help from the angle of the post and crossbar.
On 72 minutes, Bull fed Joe Palmer, whose terrific curling effort from 22 yards out was once again well kept out by Jones.
To their credit, Llanfair weathered the storm, and in the last 5 minutes or so, pressed forward to try and at least grab a consolation goal. They created a couple of half decent efforts, but the Flint rearguard stood firm to see out the game and book their place into round 2.
Footnote : Many thanks to all who contributed to the collection for the family of Liam Simpson at today's game, particularly to Llanfair FC for their generous donation.