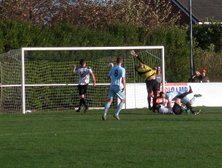 On a crisp November afternoon, Flint carved out the first chance on 8 minutes, when a ball over the top found Kyle Smyth in space. As he ran into the area, he tried to curl the ball around the keeper into the opposite corner, but Llay custodian Dave Williams pulled off the first of several decent saves as he palmed the ball away.
The home side then started to get to grips with things and rise to the occasion, putting the Flint goal under pressure and creating a series of half chances, that they were just unable to take advantage of. On 20 minutes, from a corner, Flint goalie Nik Lee-Bulmer lost the flight of the ball, and a header came back off the bar before being cleared. A few minutes later, Alistair Gibson hit a solid strike that Bulmer blocked. From the resulting corner, the impressive Luke Taylor headed over from a good position.
Despite the probings from the ever willing Joe Palmer in midfield, the Flint forwards were unable to break clear on goal. However, salvation was on hand just before the half hour mark when the Silkmen were awarded a free kick some 25 yards out. Ieuan Hewitt stepped up and unleashed one of his rockets that arrowed into the top corner, out of Williams' reach. This seemed to prompt Flint into trying their luck from longer range, and on 35 minutes, Alan Bull let fly from distance, but this time Williams was equal to it, and tipped over his effort.
Just before the interval, Llay wasted a good chance to get back on terms as skipper Jack Edwards headed wide when well placed at the far post.
On 50 minutes a Palmer corner was almost given the perfect finish when Carl Rodgers rose highest , but his well directed header struck the top of the bar. Following a good attacking move a few minutes later, the ball broke into the path of Chris Li who unleashed a fierce first time effort, that forced Williams to pull off a great one handed save as he flung himself across his goal.
Just as it looked as though Flint had the measure of their opponents, and were starting to look comfortable they were hit by a sucker punch. A through ball should not have caused any undue problems, but a misunderstanding and hesitation between Hewitt and Bulmer, suddenly ,meant that Rhys Lloyd looked favourite to get on the end of the ball. As Hewitt tried to recover, Lloyd tumbled as Bulmer flung himself on the ball. After what seemed an age, the referee decided that Hewitt had impeded Lloyd and awarded the penalty. Matt Worrall confidently tucked away the spot kick, and it very much looked it was game on as the Llay supporters raised the decibel levels.
To their credit, though, Flint struck back almost straight away, with a fine individual goal from Smyth. He picked the ball up wide on the left, and cut inside racing across the edge of the 18 yard box, evading several challenges. He eventually got the space he was looking for to get a sighting of goal, and with perfect placement, pulled a low shot back into the opposite corner from where he had finished up.
Then, a few minutes later, Llay's task became that much more difficult when they were reduced to 10 men as John Rhys Edwards was shown his second yellow card of the game. Whilst this second booking have been judged to be somewhat harsh, he was, in fact incredibly lucky to still be on the pitch, following an altercation on the sidelines towards the end of the first half, when he grabbed Flint's Johnny Hill around the neck. But for that, he only received a yellow, whilst the Flint coach was shown to the stands.
The home side, though, showed admirable commitment to keep going, and it was only with the introduction of Luke Tyson late on that Flint managed to finally make the game safe. Tyson delivered an inch perfect cross on 83 minutes, and Chris Budrys dispatched his header into the net from 6 yards out to seal his team's passage into the third round.