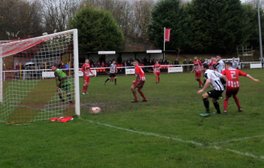 Ex-Buckley player Alan Bull returned to haunt his old club with the vital goal to put Flint into the draw for the 4th round of the Welsh Cup.

In a very evenly contested match, as the game entered the last quarter, it became increasingly apparent that just one goal would probably decide this encounter, and Bull struck in the 74th minute having come on as a substitute a few minutes earlier. Stefan Halewood received the ball wide on the right, following a Flint throw in and swung a cross into the box. Bull met his delivery with a well judged flicked header that sent the ball spinning into the bottom corner of the net, just beyond the reach of Buckley keeper Joe Makoruk, who couldn't get down quick enough.
This win was the first victory for Niall McGuinness, since taking over as manager, and he will no doubt have been delighted how his side reacted to last week's disappointing display and dug in and were prepared to grind out a result, on a very heavy pitch.
After a cagey opening 10 minutes, Flint created the first couple of chances in the game. On 13 minutes. Makaruk failed to collect a cross, but Chris Budrys, who was positioned just beyond the keeper was unable to connect with the ball, with the goal at his mercy. Then, a few minutes later, a cross to the far post fell to Kyle Smyth, but his shot from a tight angle was well blocked by Makoruk with his legs.
Buckley put together a good attacking move on 20 minutes, which resulted in something of a scramble inside the Flint box, with a number of shots being blocked by Flint players before the ball eventually was hit wide of the post. Then came the best effort of the half, when Buckley's Jake Roberts hit a splendid 30 yard effort that looked destined for the top corner. Nik Lee-Bulmer arched backwards, and at full stretch, managed to get his fingertips to the ball and pushed into onto the bar, before collecting it on the goal line as it bounced down.
From that let off, Flint sprang forward, and Smyth delivered a dangerous cross which led to both Charlie Hughes and Budrys getting shots away, but on each occasion their efforts were blocked by Buckley defenders.
With 3 minutes to go to the break it was Flint's turn to hit the woodwork. From a cross, the ball was only cleared into the path of Richie Foulkes whose first time effort slammed back off the post and away to safety.
In the second half, the pitch was starting to take its toll on both sides and chances were few and far between. But from a corner on 63 minutes, Buckley's centre half, Lewis Hone rose highest and powered in a header that struck the same post Foulkes had earlier rattled, with a follow up effort being well blocked by the Flint defence.
Then, almost immediately, a long ball found Smyth in a race with Makoruk to see who could reach the ball first. The Flint player reached it first, but with the Buckley keeper closing him down, he was unable to hit the target, and the ball rolled agonisingly wide of the post.
On 66 minutes, Roberts again tried his luck from distance for the Stags, but this time his snapshot went just wide of the mark.
Then came Bull's timely intervention, and for the remaining quarter of an hour or so, the Flint defence, expertly marshalled by Halewood and the impressive Ieuan Hewitt, who was switched back into the centre half position following the debut of James Jones at right back, held firm and saw the game out, to book a place in the last 16. It was a shame that the bad weather may have put a few people off coming to watch, as this was a real competitive game, with no quarter asked for,or given, with the Silkmen's little bit of extra quality just giving them the edge.

Flint MOM - Ieuan Hewitt (returned to a central defensive position he put in another excellent performance, especially in the second half as Buckley tried to get on top)