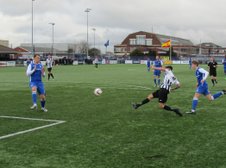 Disciplined Display sees Flint safely through to the semis

In a game in which last week's hero Nik Lee-Bulmer didn't have a shot to save in anger, a final 1-0 scoreline scarcely does justice to Flint's performance.

Flint's midfield quartet of Carl Rodgers, Joe Palmer, Kyle Smyth and Mark Cadwallader were superb and ran the game for long periods. They were ably supported by Ieuan Hewitt, whose first half goal proved decisive, and earned Flint a semi final berth in the League Cup competition for the third successive season.
The opening 25 minutes saw both sides playing neat, controlled football on the artificial surface, but neither goalkeeper was seriously called upon to make a save. Airbus were determined to play the ball out from the back, and had quite a bit of success of building their attacks this way in the opening period. However, once Flint started to press higher up the pitch and deny them the space to do this, they gained the upper hand, and were winning possession back in good areas of the field.
On 27 minutes, Palmer played a lovely ball into Smyth, who was positioned on the left edge of the box. He jinked his way closer to the goal before hitting a shot that looked to have broken the deadlock until a last ditch block by a covering defender turned it out for a corner.
Five minutes later, Flint did break the deadlock. A good passing move, once again orchestrated by Palmer, saw the Silkmen cut through from midfield. Cadwallader laid it off into the path of Hewitt, and he struck a thunderbolt from 28 yards that flew into the net, giving Coulson, in the Airbus goal, no chance.
A minute into the second half, Andy Brown delivered a good cross from the left, and Alieu Sheriff got a flicked header on the ball, but put his effort just wide of the target.
On 56 minutes, Palmer delivered a ball into the box from a free kick. From the resulting knock down, Cadwallader got a shot away that flashed past Coulson, but which was cleared off the line. However, it could only be directed into the path of Brown, whose first time effort went across the face of the goal, and out to safety from an Airbus perspective.
Flint looked extremely comfortable, and the centre back pairing of Jacob Lever and Jacques Welsh delivered another composed performance, easily snuffing out any attacks from the home side down the middle of the pitch. It was only when Hewitt had to depart the action with a groin strain with 14 minutes left that Flint lost their shape a bit, and Airbus enjoyed a good period of possession inside the Flint half. However, they could not turn any of it into any meaningful efforts upon Bulmer's goal, and with substitute Chris Budrys winning several headers inside his 18 yard box from corners and free kicks, to alleviate any pressure, Flint's defence remained resolute.
A second 1-0 away win in this season's competition meant the Silkmen were rewarded with a place in the semi finals, after putting in an excellent all round team performance, the manner of which will have no doubt delighted manager Niall McGuinness and his backroom staff.

Flint MOM - Ieuan Hewitt (Solid defensively and excellent in supporting the attack, as exemplified by his goal)