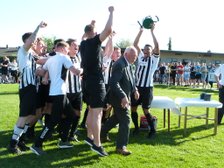 Flint finally got their hands on the League Cup but had to do it the hard way, having been reduced to 10 men.

In their 6th appearance in the final of the competition, the Silkmen emerged victorious 8-7 in a thrilling penalty shoot out after both sides were deadlocked 1-1 at the end of normal time, and extra time remained goal-less. Andy Brown struck the deciding spot kick in a tense sudden death decider, after Nik Lee-Bulmer had saved from Gresford's Matt Cole.
Flint powered out of the blocks at the start of the game, and Mark Cadwallader pounced on a loose ball in the box to give them an early lead. For the fist 25 minutes, it was all Flint but their possession was unable to yield any further goals. The Silkmen were particularly dangerous from set pieces, and Cadwallader almost profited following a corner on 16 minutes, but his header was well saved by Mike Platt in the Gresford goal.
Just before the half hour mark, though, Flint were caught flat footed, and Mike Latham raced through on goal, but Bulmer produced a fantastic save to deny him.
As we are only too well aware from our previous encounters, the Colliers are a resilient and determined side, and it was only to be expected that they would force their way back into the game, especially as they were only chasing a one goal deficit. And so it proved early in the second period, when Jack Jones struck the equaliser.
From then on, Gresford were generally the better side, putting some nice passing moves together, although not being able to seriously trouble Bulmer in the Flint goal.
A rare Flint sight on goal occurred on 67 minutes, when Alieu Sheriff fed Shaun Beck, but his effort was over the bar.
Sheriff then blotted his copybook near the end of normal time, as he was issued a yellow card, then a red in quick succession. The yellow was given for a foul, but stupidly, he then further reacted to what he saw as play acting by his opponent, and received a straight red for laying hands on the Gresford player.
This left Flint with a mountain to climb, as they were forced to play extra time in the sweltering heat with only 10 men. But to their credit, they dug deep, and stuck to their task, determined not to finish as runners up once again in this competition. They managed to see out the extra time period reasonably well, with the impeccable Carl Rodgers and Jacques Welsh, giving Bulmer some great protection.
And so it came down to the dreaded penalty shoot out. Gresford took the opening spot kick, and opened the scoring, with Richie Foulkes replying in kind for Flint. The Silkmen were then handed an early advantage, when Jack Challoner blazed over, and Cadwallader netted to put his side in the driving seat.
Each side then scored their third and fourth penalties, and when Gresford netted their fifth, it meant Kyle Smyth had to score to win the cup for Flint. Agonisingly, his effort struck the post, tying the scores at 4-4, after five penalties each, meaning we moved into sudden death. For the next 3 penalties apiece, both sides scored. Then, Cole saw his kick saved by Bulmer to once again open the door for Flint. Andy Brown stepped up, and kept his composure to slot home, to send both his teammates and the Flint supporters into rhapsody, as choruses of "The Yard" echoed around the Memorial Fields in celebration of the cup triumph. A League Cup winners medal is also a fitting send off for Shaun Beck, who recently announced his retirement from regular Saturday football, and is just reward for his years of loyal service to the club. From all at Flint Town United, thanks for all the memories and the goals you've given us over the years Shaun, you've been a tremendous servant to your home town club.