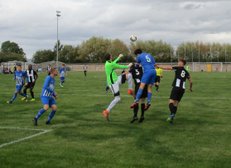 Cup holders Flint bowed out in the first round of this season's competition as Holyhead avenged their semi final defeat of last season.

The Harbourmen got their tactics spot on, with skipper Alex Jones putting in a towering performance at centre back, scarcely putting a foot wrong all game, and he was ably supported by Rees Brown, his partner in the heart of the defence, and goalkeeper Carl Jones, who thoroughly commanded his 6 yard box. Up front, they looked to use the pace of Jamie McDaid and Harry Galeotti, to hit on the break.
During the opening quarter of the game, Flint posed something of a threat from long throw situations, but they lacked having a player in the right place at the right time, to latch onto any loose balls, before they were cleared away. But as the game wore on, keeper Jones and his defence began to deal more comfortably with this threat, and were able to nullify it with relative ease.
Hotspur were snapping into tackles and were generally faster to the loose ball than their Flint counterparts, as they grew more into the game and posed more of an offensive threat.
On the half hour mark, Galeotti beat the offside trap of the hosts, and sprinted into the box. Sam Hart showed good recovery skills to put in a last ditch sliding tackle and win the ball , to prevent the Holyhead youngster getting a shot on goal.
If this was a warning to be heeded, Flint were guilty of ignoring it, and five minutes later paid the price. This time it was McDaid who ran through, beating the offside trap. Keeper Aaron Jones raced out to force McDaid wide, but the forward kept his cool and curled a shot across Jones and into the far corner to put his side 1-0 up.
The Silkmen put together a good move on 41 minutes, resulting in a cross played in from the right , which was partially blocked, but fell to Luke Blondel, who had his back to goal. He turned and hit a goalbound shot that was blocked at close range by the arm of a Hotspur defender, with the referee adjudging that the closeness of the defender meant it was not a deliberate handball.
Then, at the end of regulation time in the first half, Hotspur doubled their advantage from a corner. Dean Garmey swung the ball over to the far post, and Alex Jones was on hand to power the ball home.
Flint could have hit back in the opening stages of the second half, and had they done so, perhaps the momentum may have swung back their way, but unfortunately, Mark Cadwallader, who has been prolific so far this season, squandered the opportunity. Hart had made a good foray down the left, and the ball was played across the edge of the 18 yard box, into the path of the incoming Cadwallader, whose instant shot cleared the bar.
Holyhead could have put the game to bed on 65 minutes, when the dangerous McDaid broke, and in turn found the supporting Luke McGiven, who was presented with a good sight of goal. However he miscued his shot, and it was heading wide until until it struck Myles Hart, which sent it back towards goal, but fortunately for the defender it looped over the bar.
As the clock ticked down, Flint were becoming increasingly desperate in their attempts to get back into the game, and the two Jones' (Alex and Carl) were successfully repelling anything that was launched at them in the box. Flint's best attacking moves tended to be down the right, with the industrious Kyle Smyth attempting to drive them on and get a foothold back in the game.
Another good chance came Cadwallader's way on 74 minutes, but his attempted half volley from 16 yards went the wrong side of the post. As the game was nearing its conclusion, Alieu Sheriff let fly with a 22 yard effort that swerved in front of Jones, but the Hotspur keeper was alert enough to keep it out.
Two minutes into added on time, Flint finally found the back of the net. A ball was crossed across the face of goal, and Sheriff collected it. Jones came out to spread himself and block Sheriff's shot, but the Flint striker got onto the rebound and crossed it into the path of Cadwallader, who, this time, made no mistake and lashed the ball into the goal. But unfortunately, it was too little too late, and the holders bowed out of the cup, as Holyhead deservedly booked their place in the quarter finals.