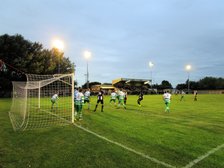 Against all the odds, with an outfield player starting in goal, then being reduced to 10 men, Flint triumphed in extra time.

This remarkable win also marked manager Niall McGuinness' first derby victory over Holywell, and is a further testament to the strength of character of the squad he and his management team have assembled for this season.
With no senior goalkeeper being able to be signed and cleared to play in time, McGuinness decided to continue with Andy Brown in goal. Brown had taken on the role in the second half of Saturday's game after Josh Hart was injured.
Things looked ominous for Flint early on, when they were caught cold from a corner with just 2 minutes on the clock. The ball was played to the far post, headed back across to Mathew Kendrick, who could hardly believe his luck at all the space he was afforded just a couple of yards out, and he bundled the ball over the line to give his side the lead.
Flint were looking for a spark of inspiration to get themselves back into the game, and found it in the form of Jake Hampson, who was causing all sorts of problems with his runs down the right flank. On 20 minutes, the youngster put over a deep cross, that Holywell keeper Andy Metcalf came to punch, but his clearance only landed in the path of Richie Foulkes, whose goalbound shot was blocked a couple of yards from the line by the alert Jon Jones.
On the half hour mark, Hampson again broke forward down the right. As his progress was temporarily halted, he exchanged passes with Jacques Welsh, before stepping infield and delivering a sublime cross with his left foot that was just asking to be put away. Luke Blondel duly obliged with a flying header, to restore parity to the scores.
As normal time carried on, neither keeper was seriously troubled by shots in open play, with the danger coming from set pieces. Flint always looked vulnerable defending corners, whereas Holywell were susceptible at long throws. On the hour, Jack Lewis supplied one such throw, which Foulkes flicked on into the patch of Alieu Sheriff, who hooked the ball onto goal from close range, only to see it cleared off the line. Then, on 83 minutes, another good chance from a long throw, when a Holywell defender headed the ball invitingly into the path of Brandon Burrows, but from a good position he put his effort over the bar.
By this time Flint were playing with 10 men, as Tom Kemp was shown a straight red for taking the law into his own hands, following a bit of "afters"after a Holywell attack had broken down and was cleared.
The long throw tactic proved successful for Flint in extra time, as Kyle Smith got on the end of a flick on to send a looping header into the Holywell net.
The Wellmen equalised in the second period of extra time, as Kendrick grabbed his second of the evening, as he forced the ball over the line following a goalmouth scramble from a corner. Smyth then went close for Flint with five minutes of extra time remaining, as the Silkmen sought to settle the tie before the dreaded penalty shoot out. Then, just a minute later, Brandon Burrows collected the ball in space on the edge of the box, and coolly slotted it home to win the tie for his side and send the home fans wild with delight.