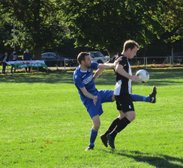 Flint through to Welsh Cup round 2

In the setting of the beautiful Tanat Valley, Flint successfully overcame the twin challenges of the home side and their tight, compact pitch.

Not only was the pitch small, but the grass was also very long, making progressive passing football extremely difficult.
Indeed, the pitch may have had a part to play in an early let off for the visitors, when Llanrhaeadr spurned a glorious opportunity to open the scoring after just two minutes. Iain Edmonds made the most of the space afforded to him, to deliver a lovely cross in from the left, that picked out an unmarked Marc Griffiths, but the ball appeared to hold up in the grass, with the result that the striker failed to connect properly, with the goal at his mercy.
On 13 minutes, Flint got their first proper sighting of the home goal, when Kyle Smyth and Andy Brown linked up well down the right, with the ball then being played across the edge of the 18 yard area to skipper Richie Foulkes, whose goalbound effort was deflected out for a corner by a Llan defender in the nick of time.
As the half wore on, Flint began to adapt better to the playing surface, and their two debutants, Francois "Frankie" Antoine and Socrates Martins displayed some nice touches on the ball. Up front, Brown was winning his fair share of headers, but unfortunately, no-one was able to profit from his knock downs.
Jack Lewis' long throws were also causing some anxious moments for the Llan defence, and on 24 minutes, one such delivery caused chaos and confusion, only for the ball to be deflected just over the bar, as defenders once again got their bodies in the way.
Llanrhaeadr put together a nice little move just after the half hour mark, which almost resulted in a goal. Griffiths won the ball, possibly with the aid of his arm, but got the benefit of the doubt, and then played an excellent one-two with his strike partner Iwan Mathews, which took him clean through on goal. He hit a low shot, that Flint keeper Aaron Jones did well to collect.
Flint made the breakthrough on 37 minutes, with Lewis once more the provider, as he delivered the ball into a crowded box. After a bit of head tennis, as the ball bobbled around, Myles Hart found himself in the right spot to connect with the ball and send a looping header into the net from 8 yards out.
Having grabbed the all important first goal, Flint looked very comfortable, and relaxed in their play. They opened the second half brightly, and Lewis was finding joy with some of his through balls that were threading their way through to the forwards. The Silkmen thought they had a chance to increase their lead on 55 minutes, when Brown raced onto a through ball, and went down in the area after a coming together with home keeper Jimmy Haynes. However, rather than being awarded the penalty, Brown found himself in the notebook for simulation. Whilst it's arguable that Haynes got to the ball first before making colliding with Brown, there was no doubt that he did indeed make contact with the Flint forward, so a booking seemed incredibly harsh. Unfortunately, this was to be the prelude to a series of bizarre decisions that were to baffle and frustrate both sets of players and supporters alike, as the half wore on.
On the hour mark, Flint were successfully awarded a spot kick. Kyle Smyth collected the ball and made a direct run in on goal. Just as he was about to get his shot away, inside the area, he was clattered into by Dan Kelly, who knocked him off his stride and forced him to blaze his shot high and wide of the target. The referee awarded a penalty for the late challenge, and Richie Foulkes sent Haynes the wrong way to give Flint a 2-0 lead.
Foulkes could have bagged another a couple of minutes later, as he looked to have steered a header just inside the post, but at the last moment, the bounce took it just wide of the target.
The home side enjoyed a period of pressure with 15 minutes remaining, earning a couple of corners. Following one of them, Khyam Wytton collected the ball wide on the right, after it had run through to him, and flashed it back across the face of the goal. It looked as though it may end up in the back of the net, but Jacques Welsh was stationed on the line, and glanced the ball away to safety.
Llan were given a route back in the game with 5 minutes remaining, when what looked a fairly innocuous challenge by Foulkes, just inside the area, was penalised, and a second spot kick of the afternoon was awarded, this time to the home side. Edmonds cracked home the penalty to set up a tense final few minutes.
But Flint held firm, and earned themselves a decent away win, and a place in the hat for round 2 as a consequence.