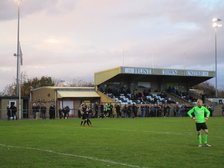 This was a thoroughly absorbing and entertaining game, against two well matched sides, but Flint deservedly took the honours thanks to an excellent second half performance, which saw them come back from a 1-0 half time deficit.
On 8 minutes, Brandon Burrows whipped in a quality free kick from the right, which Damien Ketley connected with just beyond the far post, but under pressure, he was unable to steer it into the net, and instead his header finished just wide of the target.
Following that let off, Gresford started getting much more possession, and their players were quick to close down their Flint counterparts, and deny them space. In particular, their right back Joe Newton was proving to be a threat coming forward, and was capable of either cutting inside or crossing the ball with his right foot, and every time he was on the ball he was a threat to the Flint defence.
After about half an hour, Flint's midfield trio of Richie Foulkes, Brandon Burrows and Ryan Smith started to gain the ascendency, and were the driving force for the Silkmen to start taking the game to their opponents. However, up to this point, neither goalkeeper had been called upon to make a serious save in the contest.
It was slightly against the run of play when the Colliers took the lead on 36 minutes, following a corner, which initially looked as though it was being comfortably dealt with. However, the attempted clearing header went up in the air rather than out, and the ball landed back in the box. With the Flint defenders appearing somewhat hesitant, the Gresford attackers seized on the opportunity, and Owen Roberts managed to get a toe on the ball to send it into the net just beyond the reach of Aaron Jones.
Flint reacted well to the setback, and pressured the Gresford goal as they sought to get back on level terms in the remaining minutes before half time. When Andy Brown was unceremoniously bundled to the ground as he tried to reach a cross played into the box, it looked as though a penalty was a certainty, but to the ire of the Flint supporters and players, the referee was unmoved and waved play on.
At the start of the second half, Flint pressed forward again, and this time they were awarded a penalty when Damien Ketley crumpled to the ground from a rash challenge from behind from a Gresford defender. Richie Foulkes stepped up, and once again the Flint skipper obliged from the spot, sending Ben Jones the wrong way.
Having got themselves back on level terms, Flint had a scare a couple of minutes later, when Newton, once again in space on the right, received a long ball played into his path from the opposite flank. He looked up, and tried a spectacular effort, which Jones had to be alert to, as he palmed the shot onto the top of his bar.
From then on, Sam Hart and Jacques Welsh generally kept the Gresford attack at arms length, and with Burrows, Foulkes and Smith covering good ground, Flint looked the more threatening.
On 68 minutes, Gresford had a throw deep in their own half, near to the corner flag on their left. As they tried to play their way out, following a short throw, Ketley exemplified the Flint team ethic, by closing down the ball, and robbing the defender of the ball. He then demonstrated great strength and presence of mind, to force his way to the bye line before delivering a perfect ball to strike partner Jack Higgins, who had recently been introduced from the bench. Higgins calmly stroked the ball home, to open his account for Flint.
As the game entered injury time, with Gresford pressing up field, a ball was played back to their last defender, who slipped at the vital moment, allowing Socrates Martins to take possession of the loose ball. Martins was then faced with a long run in on goal, and he kept his composure to slot the ball past Jones and effectively secure the win for Flint.
With time almost up, the Colliers bagged their second goal of the game, as Joe Davies got on the end of an excellent cross to head in, but by that point it was just a consolation goal, as the final whistle sounded just after the restart.

Flint MOM - Damien Ketley (there were several worthy contenders, but for me Ketley exemplified the overall team spirit in willing to chase down balls and regain possession, especially with his assist for the second goal)