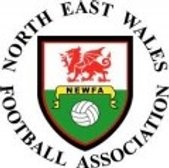 Ben Kearney was the hero for Brymbo as his hat-trick fired the Steelmen into the quarter finals of the NEWFA Cup.

Flint boss Niall McGuinness made 7 changes to his starting line up from the previous game, as ineligibility and unavailability meant he had to shuffle his pack. Nevertheless, on paper it still looked a strong enough side to be able to win the tie. But, Brymbo who are flying high atop the Welsh National League, had other ideas and arrived full of confidence and with a determination to spring a surprise. And so it proved, as for the third consecutive day, a team in amber and black caused something of a cup upset, following on from the exploits of Newport and Wolves in the FA Cup.
The Steelmen struck first, with Ben Kearney putting them ahead on the half hour mark. Flint responded with an absolute screamer from Alieu Sheriff, that powered it's way into the net from fully 25 yards out. so the teams went in level at the break.
But Brymbo still had the bit between their teeth, and a second half double from Kearney ensured their progress into the quarter finals.