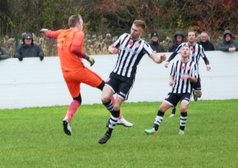 Early 3 goal salvo does the trick for Flint

Three goals in the opening twenty minutes set Flint on course for victory and a place in the 3rd round of this season's JD Welsh Cup.

The Silkmen signalled their intention in the opening couple of minutes, when first Nathan Brown was put through on goal and Greenfield keeper Louis Pritchard did well to block his effort. From the resulting corner, the ball bounced around dangerously in the box before Mark Cadwallader pounced with a header that was cleared off the line.
On 8 minutes, Richie Foulkes played a diagonal crossfield ball in the direction of Callum Bratley, but which fell short of its intended target. Pritchard raced out of his area and attempted to clear the loose ball, but missed his kick, allowing Bratley to collect it after all, and the in form forward showed great composure to pick his spot from around 22 yards out and put Flint 1-0 up.
Barely a minute later, Brown raced onto a long ball, and hit a shot across Pritchard and into the net from 18 yards to double the Silkmen's tally.
Some neat play after 20 minutes, saw Flint further increase their lead. Chris Li played a good ball into the dangerous Brown, who manoeuvred into space and drilled a shot into the corner of the goal.
Greenfield could have been forgiven for collapsing having been hit for three goals in such a short space of time, but to their credit they responded well, and struck back with a goal of their own on 23 minutes through the prolific Sam Jones. A free kick was delivered from wide on the right near the halfway line, and Jones reacted well to fire home as the Flint defence were caught flat footed. That goal gave renewed impetus to the hosts, and the rest of the half was a much more even affair, although there were no further clear cut chances created.
In the opening stages of the second period Greenfield went close with a couple of long range efforts from Simon Fawcett and Connor Hughes, but both attempts flew just wide of the target. After that early warning, Flint adopted a more robust defensive strategy, and the remainder of the half developed into a war of attrition between both sides with neither keeper seriously tested.
Thanks to their blistering opening, Flint deserved the win and their place in the next round.