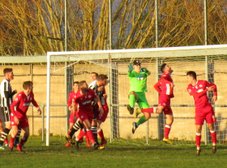 Silkmen upset Lakesiders to progress to Round 4

Flint started with a strong wind at their backs, and took the game to their opponents. They carved out the first telling chance on 15 minutes, when Alex Titchiner supplied a lovely cross which was met by Andy Brown, but his header was directed just the wrong side of the post.
Titchiner embarked on a surging run down the middle just after the half hour mark, and played a smart pass into Brown, who then produced a delightful flick into the path of Callum Bratley, who found himself face to face with Bala keeper Josh Tibbets. The Flint striker cooly placed the ball past Tibbets into the back of the net to give his side a deserved lead.
Two minutes before the interval, Bala's Lassana Mendes lunged into a horrific two footed challenge on Brandon Burrows, which left the Flint player prone on the ground and earned Mendes a straight red card. With a large gash in his leg, Burrows was unable to continue, and had to be replaced by Tom Hartley.
Flint now had the advantage of the extra man, and started the second half in much the same manner that they had played most of the first, producing calm and composed football against their higher league opponents. The Silkmen's defence were proving to be rock solid, with centre halves Tony and John Davies outstanding, helped by full backs Hartley and Tom Kemp. Also Aaron Jones, in the Flint goal, displayed excellent handling ability in the windswept conditions, and was judging the flight of the ball to perfection.
On 66 minutes. Hartley won possession, and swept down the field on the left, before finding Nathan Brown, who jinked around a defender and squared the ball to namesake Andy. However, just at the vital moment, the big centre forward lost his footing and couldn't get enough purchase on the ball, although he still managed to direct it goalwards. The lack of pace on the effort though, meant that it was cleared off the line by a Bala defender.
Bala's dangerman Henry Jones was being well marshalled by Kemp. but he did get free on 78 minutes, and played a dangerous ball across the face of the Flint goal. But no attacker was able to connect with it, and instead the ball was deflected out for a corner. That was to be Bala's best chance in a game in which their attack was by and large blunted by the Flint rearguard.
On 83 minutes, Andy Brown met a free kick with a fierce header that brought out the best in Tibbets, as he pushed the ball out for a corner. However, the relief for Bala was short lived, as from the resulting set piece, Danny Andrews supplied the ball that Brown once again met with his head, and this time there was no mistake, as it thundered into the net.
Highlights of today's game will be screened on S4C's Sgorio programme on Monday at 5-30pm, when we shall also learn of our opponents in the next round.