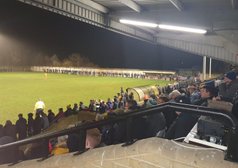 A crowd of just under 800 witnessed a thrilling match at the Essity Stadium, which saw Flint twice come from behind to book a Q/F place

The game was barely a minute old when Colwyn Bay took the lead, as a failure to cut out a cross proved costly for the Flint defence, as Julian Williams took full advantage to slot the ball home for the visitors.
Rocked by this early setback, the home side looked nervous, and lacked composure on the ball, missing their usual fluency. However, they forced a corner on 9 minutes, and a Jordan Barrow cross was powerfully met by skipper Richie Foulkes who directed his header into the top corner of the net.
But despite getting themselves back on level terms, Flint still looked uneasy, and their midfield were not functioning as a unit, hurriedly playing passes that were being cut out or dealt with comfortably by the Bay defence. Mitchell Bryant almost restored the lead for the Bay with a cheeky backheel, but the ball was scrambled away in the nick of time. The respite, though, was short lived, as the Seagulls profited from another defensive error to go back in front on 16 minutes.
Tony Davies, under pressure from Bryant played the ball back to keeper Aaron Jones, whose attempted clearance went askew, as he slipped on the greasy turf, not the first Flint player to have had problems with his footing by any means. The result was the ball only found Bryant, who raced past Jones towards the byeline, and finished from a tight angle.
Flint attempted to rally themselves, but they were still spluttering and far from firing on all cylinders. Set pieces seemed to provide the Silkmen with the best opportunities to get back on terms. And so it almost proved on 26 minutes, when pressure was put on the Colwyn Bay goal, with a number of Flint players in the box. An attempted clearance only found Brandon Burrows, and his goalward bound drive unfortunately hit a teammate, in the crowded area.
Mark Cadwallader also went close on 42 minutes with a rising shot that flashed just over the bar. Then, a minute before half time, a wonder strike from Alex Titchiner brought the Silkmen back on level terms once more. Dom McHugh had lofted a ball into the box, which was met by Foulkes, who headed it back in to the path of Titchiner, who was in space some 22 yard out. He shifted to his right and unleashed a sublime shot that arrowed into the top corner of the net and brought the Flint crowd in the stands to their feet.
After the interval, Flint showed far more composure, and looked like the team we had come to expect this season. They started putting some nice moves together, especially down the right, and were generally penning back the Bay into their own half. Callum Bratley was getting more possession of the ball, and causing problems with his runs at the Bay defence. On 54 minutes, he was instrumental in setting up a chance for Foulkes, but the effort although hard and true, was straight at Andy Coughlin in the Bay goal, and he comfortably saved. A great move down the right just after the hour mark, ended with Flint getting the decisive goal, Some slick one touch passing, resulted in Bratley getting on the ball, and he first jinked and weaved and wrongfooted his defenders, before rolling the ball into Cadwallader, whose excellent movement had created the space for him to have a one on one opportunity with Coughlin from 8 yards out. He needed no second invitation, as he smashed the ball beyond the Colwyn Bay keeper to make it 3-2 for the Silkmen.
Hesitation was almost to prove costly for Flint on 63 minutes, when, to a man their defence stopped, expecting an offside decision that didn't come. Instead, Bryant collected the ball, and looked odds on to score, until Jones, atoning for his earlier slip, raced out to meet him and got in a vital block to deny the goal, with the ball then being scrambled clear.
Nathan Brown was introduced into the fray, and was proving a thorn in the sides if the Bay defence with his energetic runs, whilst Titchiner was his usual busy self, putting himself about both in attack and defence.
Jones had to be alert again in the Flint goal on 71 minutes, as he pulled off a good save at his near post to once again deny Bryant. From that point on, Flint saw the game out reasonably comfortably, to secure their quarter final place.