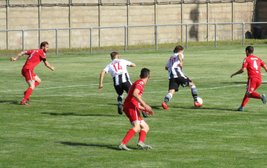 They say absence makes the heart grow fonder, and after 22 years we relished our return to the top flight, especially a winning one

From the off Flint stamped their authority on the game, and helped by the wind at their backs they dominated the first half against an experienced Newtown outfit. In fact their only regret, as they departed the pitch at half time was that they only led by the one goal, a trademark Nathan Craig free kick from 22 yards out on 33 minutes that soared over the wall and buried itself into the corner of the Robins' net.
Flint carved out their first chance after 4 minutes, when Conor Harwood got into a good position, fired in a goalbound shot that was blocked just before the line by a covering defender. Then, a few minutes later, the Newtown keeper made the first of a series of good stops when he flung himself across goal to stop a close range effort following a scramble in the box from a Craig corner.
On 11 minutes, Cadwallader breached the Newtown defence to get on the end of a lofted pass, and as Jones came to meet him on the edge of the box, his flicked header beat the keeper, but agonisingly struck the post and was cleared.
Harwood broke away down the left on 26 minutes, then cut into the area and fired in a shot that Jones got down well to save. Then Callum Bratley was bundled over on 33 minutes, presenting Craig with his free kick opportunity, and the ex-Caernarfon man didn't disappoint, putting the Silkmen deservedly ahead.
Flint created an early chance in the second half, when Bratley chased down the ball, won it, got to the bye line and pulled it back into the path of Alex Titchiner, but his shot cleared the bar.
Then, on 50 minutes, in an off the ball incident, Rob Hughes received a straight red after raising his hands in what appeared a retaliation to some close attention he was receiving from a Newtown defender.
This was a rallying call for the visitors to up the ante, and use the man advantage to good effect for the lengthy period of time remaining in the match. However, even though they had lots of possession, they were unable to make good use of it, and the introduction of Brandon Burrows into the fray was an astute move by Flint manager Niall McGuinness as he immediately made an impact in the middle of the park. First, he broke down the centre, and found himself in a one on one situation with Jones, but the Newtown keeper again excelled himself and once more blocked the effort. Then on 68 minutes, a delightful lob picked out Harwood, who found himself in on goal, only for Jones to race out and smother the shot.
As the minutes ticked by, Newtown forced several corners, and delivered quite a few crosses into the box, but each time the efforts came to nought, as Danby comfortablty claimed anything within his immediate vicinity, or the defenders in front of him, assisted by the height of Richie Foulkes, successfully snuffed out any danger. On the one occasion they did get a clear sight of goal, Jack Kelly could only head his effort over the bar on 64 minutes. In the dying embers of the game, the Robins forced a couple of late corners, and Jones, from being their hero at one end, attempted to be one at the other as he raced upfield and attempted to make something happen in the opposition box. But it was to no avail, as Flint withstood the pressure, and marked their return to the Welsh top flight with a well deserved victory.