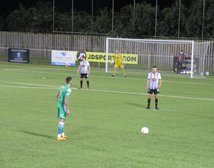 Flint claim their first win on the road

The old double act of Richie Foulkes and Mark Cadwallader, so prolific over recent seasons, grabbed the goals that earned Flint the 3 points

Flint opened up a two goal lead but Druids scored with a couple of minutes remaining to ensure a tense finish to a well contested game.
The home side had the ball in the Flint net on 8 minutes, when Naim Arsan struck in a rebound following John Danby parrying out a powerful Alex Darlington shot, only to be ruled offside. This was to prove the first of numerous occasions throughout the match that the Ancients would fall foul of the offside trap, as their forwards were often guilty of not timing their runs correctly.
Arsan was denied again on 16 games, this time by Danby who reacted well to save his stinging shot after the Druids player had cut in from the right to menace the Flint goal.
The Silkmen created their first moment of danger on the Cefn goal on 18 minutes, from a great corner delivery. With the loose ball bouncing around inside the 6 yard box, the Cefn keeper gratefully pounced on it as the Flint players were unable to make a telling contact. The game was now developing into a fascinating duel, with both sides attacking at will. On 28 minutes, Flint were awarded a free kick on the left, and Wes Baynes swung in a fine delivery, that Richie Foulkes met sweetly on the edge of the 6 yard box to head firmly home. Foulkes, who started the game in the centre forward role, was found with a good ball by Conor Harwood on 34 minutes, 18 yards from goal. Under pressure from a defender, his first time effort was sent over the bar.
Danby was called into action again on 43 minutes, whrn he had to be alert to tip over a Ben Barratt flick from close range. Then at the other end, Callum Bratley fired across the face of the Cefn goal from an acute angle on the far post.
Flint started the second half brightly, determined not to be caught on the back foot again, as they had been at Aberystwyth in their previous game. Foulkes set over a cross in the 51st minute, that looked to be dipping into the goal until Jones managed to frantically palm it onto the bar. The keeper was absolutely helpless a couple of minutes later, when a long range screamer from Baynes also thundered off the crossbar, although he recovered his composure sufficiently to gather the rebound, despite the presence of Bratley looming over him.
Druids then went straight down the other end and Danby was forced to pull off a great save to deny Jamie Reed.
Mark Cadwallader was introduced into the action on 68 minutes, and 12 minutes later he really made his presence felt when he latched onto a wonderful defence splitting pass from Baynes and calmly slotted the ball past Jones from the right hand side of the box, to give Flint a two goal advantage.
Iwan Cartwright was allowed to escape down the right on 88 minutes and delivered a fine cross to find Reed, who accepted the invitation to finish from 6 yards out, and cut the deficit back to one goal.
Flint held firm to withstand some late pressure from the home side to claim their first away victory of the season and set themselves up for Saturday's live Sgorio encounter with Barry Town United.