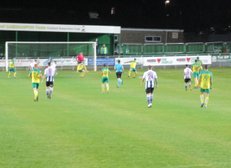 Flint find themselves behind the curve at the Oval

Having weathered a first half storm, Flint had the upper hand in the second period, but were hit by two sucker punches in quick succession

A late goal by skipper Richie Foulkes gave a faint glimmer of hope of salvaging something from the game, but in the end they run out of time and returned empty handed from the Oval.
As the game began and the rain lashed down, Flint found themselves seemingly at the mercy of Caernarfon's attackers, as they easily carved their way through the Silkmen's rearguard, and only a combination of poor finishing and the alertness of John Danby in goal prevented them from scoring. On 5 minutes, the ball was presented to Mike Hayes, just a few yards from goal, but he appeared to miskick what seemed like a simple tap in, allowing some last ditch desperate defending to scramble the ball clear.
Then, Paulo Mendes broke through on 18 minutes, but a good block by Ben Nash denied him, and Danby was on hand to spread himself and deny Mendes the follow up.
On the half hour mark, Jonathan Ogbomo escaped down the left, and slid a well judged pass across the face of goal into Hayes' path, but once again he failed to find the target from close range.
The Cofis continued to pile on the pressure, and Danby had to be on his toes when Darren Thomas breached the back line and looked to get on the end of a through ball, but the Flint keeper sprinted off his line to smother the ball in the nick of time.
It took Flint until the 36th minute to register their first meaningful effort on goal, when former Cofi, Nathan Craig, hit a shot that Josh Tibbetts parried away. As the half drew to a conclusion, Craig again found himself in space in front of goal, this time on the right of the box, and his effort was well kept out by Tibbetts. Rob Hughes latched onto the rebound, but could only direct his follow up wide of the goal.
As much as Caernarfon had been in control during the opening 45 minutes, the second half looked to be a complete reversal, with Flint now taking the game to their opponents.
A great early chance fell to Conor Harwood, who was through on goal following a defence splitting pass by Hughes, but instead of getting a shot away, he dithered, with only Tibbetts to beat, and seemed to be looking for a teammate to play in, and in the end the chance went begging. Craig then tried his luck with a long range effort, but Tibbetts was well placed to deal with it.
Callum Bratley surged to the bye-line on 60 minutes, and pulled a ball back across the danger area, but only found two well positioned Caernarfon defenders, who succeeded in clearing the danger.
Wes Baynes volleyed just over as the Silkmen continued to build up the pressure on the Caernarfon goal. However, two break away goals in quick succession soon dented Flint's hopes of taking something from the game. On 74 minutes, a raid down the right was initially repelled, but the danger was only half cleared, and with the Flint defence slow to regroup, Noah Edwards fed Mendes, and he placed the ball past the helpless Danby.
A mis directed pass out of defence, ceding possession to Caernarfon in the attacking third was harshly punished just 3 minutes later, when Mendes found Cai Jones, who struck the ball home to effectively put the game beyond the Silkmen's reach.
A nice curling effort from the edge of the box by skipper Richie Foulkes reduced the arrears for Flint in the 89th minute, but they were unable to conjure up another goal in what little time remained.
Line Ups :
Caernarfon Town - J. Tibbetts, J. Williams (c), J. Anderson-Ogbomo, L. Kondjo (S. Jones 54), R. Williams, N. Edwards, P. Mendes, C. Jones, M. Hayes (A. Hamilton 46), D. Thomas, S. Bradley. Unused Subs - T. French (GK), T. Williams, C. Evans
Flint Town United - J. Danby, N. Craig, W. Baynes, D. Thornton, B. Nash, Br. Burrows, R. Hughes (K. Smyth 82), R. Foulkes (c), C. Harwood (Be. Burrows 69), C. Bratley, N. Brown (M. Cadwallader 69). Unused Subs - A. Jones (GK), M. Blackwell