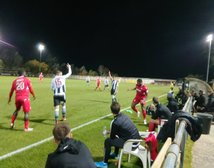 The Silkmen have now lost six in a row, but defeat against a side that moved into the top three after this win will be a particularly hard pill to swallow, as the home side will feel their performance merited something from the game. A contentious equalising goal, after Alex Jones had put Flint ahead, will only add to the sense of injustice, as the home players were adamant that Chris Venables' effort hadn't fully crossed the line, but the linesman thought differently.
Bala created some good early chances, he best of which fell to Lassana Mendes, who came in unmarked at the back post, but was unable to control the bouncing ball, and put his effort over. Having survived this let off, Flint weathered the storm and gradually felt their way into the game. Mendes committed the first of what was to be a series of fouls in the 21st minute, when he put in an extremely late challenge on Rob Hughes. The referee inexplicably waving play on and taking no action against the Bala player, something he also failed to do for all his other transgressions.
A Nathan Craig free kick proved the catalyst for Flint's goal in the 27th minute. Ben Nash rose to head the ball back across the box, two Bala defenders appeared to get in one another's way as they tried to clear, and the ball fell invitingly to Alex Jones just inside the six yard box, and he rifled the ball into the roof of the net. Good work by Joe Palmer, shortly after, set up Nash from 20 yards out, and his shot just cleared the bar.
Then, on 37 minutes, came the controversial moment when Venables met a cross at the back post, and his header was adjudged to have crossed the line, before a flying save from Aaron Jones pushed the ball out.
Will Evans spurned an opportunity for Bala in stoppage time, with a header from a corner that just cleared the bar.
Early in the second half, a foul on Mendes in a dangerous position on the edge of the 'D' was to prove costly or the home side. Steven Leslie curled the free kick around the Flint wall and with Jones possibly unsighted he was unable to make up the ground to stop the ball creeping inside the post.
Skipper Richie Foulkes went close with a left footed volley , from a good lay off by Alex Jones, as the Silkmen looked to rally.
As Flint were trying to find a way back into the game, Bala always looked dangerous on the break, and they carved our a succession of good chances which they were unable to convert. Mendes drove a ball across the face of goal following a good run, but nobody was on hand to meet it, and then Evans and Venables combined well, but Evans fired wide. With 10 minutes remaining, Henry Jones missed a glorious chance to make the game safe for the Lakesiders as he directed his header wide.
Flint's best chance in the closing stages was a Rob Hughes free kick, which cleared the bar, although in fairness Alex Ramsey, in the Bala goal, looked to have it covered. Henry Jones then went close again for the visitors, before Flint forced a scramble in the Bala box from a long throw, but nobody in a black and white shirt could get a telling touch on the ball.
In the end Flint will regret not having worked Ramsey a bit harder, as balls into the danger zone were not followed up on. We now face an enforced break due to the firebreak lockdown which has been announced in Wales, but on the basis of this display there is at least some cause for optimism that our losing streak will soon come to an end when things resume.